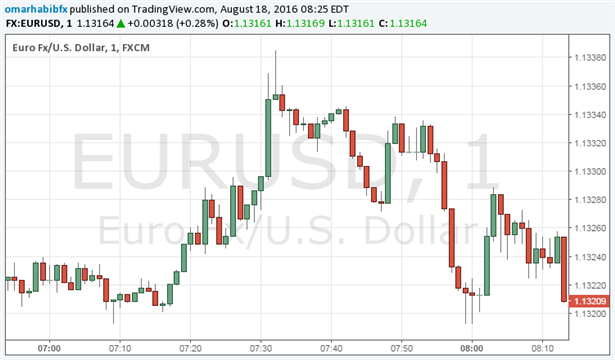 - Officials saw no chance for breakout in inflation but were content with current easing program.

- More of the same from the Governing Council spurred a limited market reaction.

The European Central Bank (ECB) released the minutes from its July meeting which showed “cautious optimism” on the euro-are economy, largely due to a less-negative outlook on the aftermath of Brexit. The minutes stated that consequences from the ‘Brexit’ vote were “less marked” than anticipated and that the shock from the vote was contained, despite the fact that downside risks had clearly risen with uncertainty. The ECB did step in and made the call for a reduction in the political uncertainty regarding the actual exit of the UK from the EU.

In regards to the monetary policy outlook, the ECB seemed content to continue with its current easing program. While the minutes did mention that the ECB could not see a clear upward trend for inflation in the near-term, there was consensus to wait for further information before making any adjustments to the current policy, with ECB Chief Economist, Peter Praet, mentioning that the weakness in price pressures will be an “ongoing source of concern.”

There was very limited market reaction in the Euro across the board. EUR/USD traded within a range of 20 pips, rising to a high of $1.13385 and then settling near $1.1321. With FX volatility edging higher again, it’s the right time to review risk management principles to protect your capital.