- Fed officials decided to wait in July, despite some calling for an increase in the Federal Funds Rate.

- The USDollar spiked higher and then reversed against all major pairs.

The Federal Open Market Committee (FOMC) Minutes for its July meeting showed a split in the path for rate hikes ahead, with some even calling for a hike at the July meeting. The biggest highlight of the Policy Statement was a single line that noted “near-term risks to the economic outlook have diminished,” which was the first reference to risk since the December 2015 statement in which the Fed descriped the risks as ‘balanced.’ The minutes expanded on this with a reference to near-term risks in the financial system due to low rates, as well as the possibility of increased medium to long-term risks related to ‘Brexit.’

The Fed has so far had to decipher quite the mixed picture in economic data. GDP has been signifcantly weaker than expected with US growth only 0.8% in Q1 and 1.2% in Q2. As of the latest update, GDP growth for Q3 is expected around 3.6%, according to the Atlanta Fed’s GDPNow.

The Fed’s mandate exemplifies the real dilemma facing the Fed. The employment half of its mandate has continued to be strong despite a significant slowdown in May, with the last two Jobs Reports showing job growth of 292k and 255k. On the other hand, the Fed’s preferred measure of inflation has continued to run below the Fed’s objective of 2% growth, since its implementation in January 2012. Headline Personal Consumption Expenditure (PCE) growth is only at 0.9% and even Core PCE is below target at 1.6% growth. The Minutes from the July meeting noted low risk of a breakout in inflation, despite strong job growth.

Yesterday, following the release of weaker-than-expected Consumer Price Index(CPI) growth than expected, the dollar spiked lower. At the same time as the release, President William Dudley of the New York Fed began speaking, clearly stating that September remains on the table and that Fed Funds Futures were underpricing the chances of a 2016 rate-hike, with the dollar immediately reversed its losses from earlier this week following the fresh rhetoric. 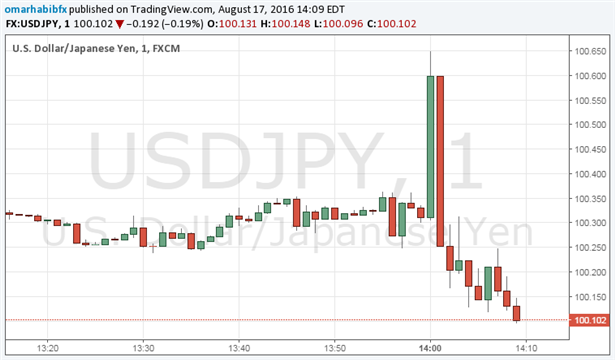 The USDollar rose against all major pairs in the immediate wake of the FOMC Minutes. However, it reversed the gain very quickly and fell to fresh session lows. At the time this report was written, USD/JPY was trending at 100.10.