Chinese Yuan Slips After Round of Disappionting Lending, Investment Data

The Chinese Yuan was helped along in its slide versus the Dollar Friday by a Chinese new Yuan loan figure which showed significantly slowing. This data is directly curbs China’s health but it also bodes poorly for the Aussie Dollar – though the currency was little moved. The important trade link between Australia and China has been recently superseded by intense focus on monetary policy. The Reserve Bank of Australia reduced rates 2 months after concluding that the main lending rate was at a level seen as consistent for sustainable growth and inflation returning to target over time.

In July, new Chinese yuan loans increased by 463.6 billion (CNY) versus 900 seen and 1,380 in June. While a slowdown in bank lending was widely expected, the reading fell below expectations and subsequently hit to a 2 year low. As Currency Analyst Renee Mu mentioned, the People’s Bank of China is less likely to introduce more easing plans to help tame price bubbles as the private sector shifts to real estate investment from equities.

In addition to the new lending figures, aggregate financing would similarly fall far short of already restrained expectations with a 487.9 billion growth versus the 1000 billion expected and 1,629 previously. Analysts such as Chief Strategist John Kicklighter have suggested that much of the country’s remarkable growth through the Great Financial Crisis was founded on massive lending and infrastructure investment programs. As the government attempts to cool its exceptional pace of expansion while simultaneously avoiding a problem with non-performing loans, the market watches closely for signs of success and risk.

Moreover, it appears that traders were hesitant to take on further USD/CNH or AUD/USD ahead of key event risk. The AUD/USD was relatively tame in a range of 23 pips after the Chinese data. After the US released July’s retail sales report which missed expectations, the US Dollar plunged. The sentiment linked currency swung within a volatile range of 100 pips before ending the trading day.

Meanwhile, the DailyFX Speculative Sentiment Index (SSI) is showing a reading that roughly 60.5 percent of open positions in AUD/USD are short. The SSI is typically a contrarian indicator, implying further AUD/USDstrength ahead. 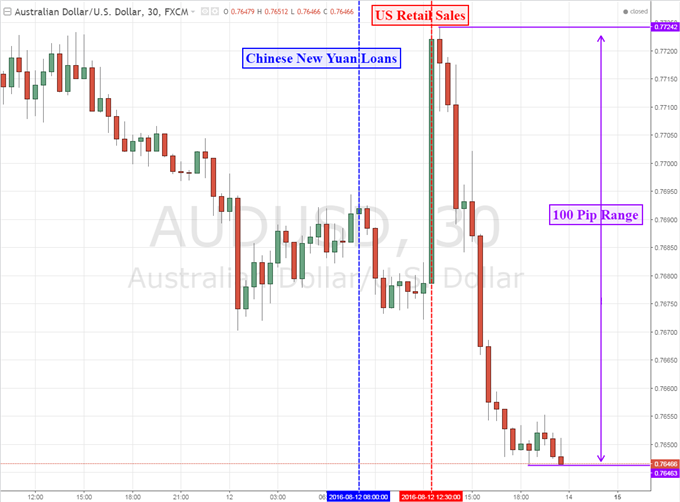