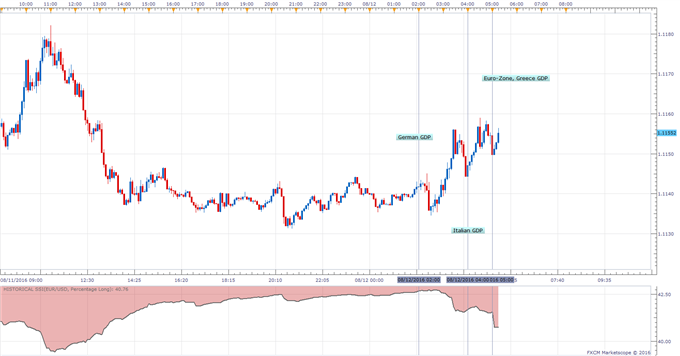 -Germany’s growth slowed but was better than expected at 0.4% QoQ, Greece surprised to the upside

The Euro was little changed versus the US Dollar (at the time this report was written) after today’s Euro-Zone 2Q GDP figures came in line with expectations.

According to Eurostat, Euro-Zone’s Gross Domestic Product (GDP) matched the initial preliminary report and grew a seasonally adjusted 0.3% in Q2, a slowdown from the impressive Q1 figure of 0.6%, but in line with expectations.

The year-on-year change in GDP was 1.6%, as the first estimate, in line with expectations.

The Greece GDP figures released at the same time surprised to the upside printing +0.3% QoQ versus the -0.2% expected print and a prior revised -0.1% figure (from -0.5%).

The economy shrank on an annual basis printing a NSA YoY figure of -0.1%, better than the expected -1.8% fall and the prior revised -0.8% reading.

Earlier today, Germany saw growth slow to 0.4% QoQ from the prior 0.7% figure, but the number was better than the expected 0.2% print.

Perhaps worth noting as well was the worrying readings from Italy indicating growth stagnated, printing 0.0% QoQ versus an expected 0.2% and a prior 0.7% read.

The year-on-year number disappointed too with the backdrop of the upcoming referendum for a constitutional reform.

Today’s numbers might paint a picture of diverging economic paths in the Euro-Zone, but with an overall ‘summer lull’, depressed volatilityand a Euro which seems “driver-less” at the moment, the currency was seemingly unimpressed by today’s developments.

Looking ahead, Advance US Retail Sales data is on tap and we highlighted the EUR/USD levels to watch here.

Meanwhile, the DailyFX Speculative Sentiment Index (SSI) is showing that about 40.7% of traders are long the EUR/USD at the time of writing. The SSI is mainly used as a contrarian indicator, but the current range conditions are correlated with retail traders’ more successful periods (see “Traits of Successful Traders” research), implying possible weakness ahead.