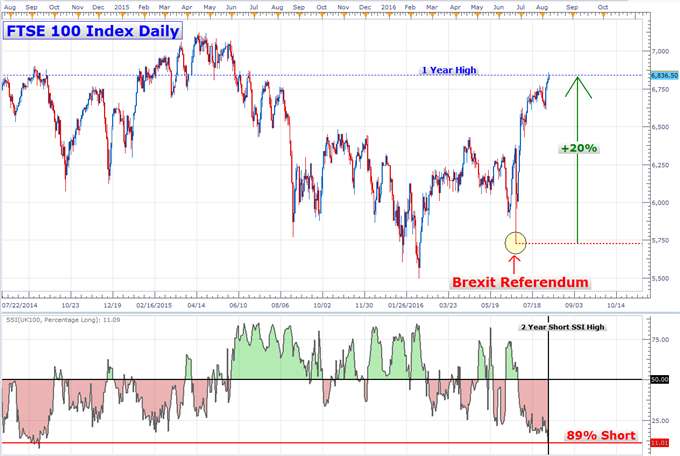 The DailyFX Speculative Sentiment Index (SSI) reveals that short FTSE 100 positions held by retail investors overwhelm long trades by the largest margin since September 2014. As of this market alert, SSI shows that traders are 89 percent net short the FSE 100 - an index largely consisting of market capitalization of the London Stock Exchange (LSE).

Simultaneously, the index climbed roughly 20 percent since the Brexit vote surpassing a 1 year high – as can be seen on the chart below. As it happens, the UK referendum was also the last time the SSI recorded that most traders holding positions in the index were net long.

SSI is typically a contrarian indicator. In this case, since roughly nine out of ten traders are short the FTSE 100, the standard interpretation of investors’ appetites to pick tops and bottoms would suggest further gains may be in order.

The recent gains in the FTSE 100 may have been supported by August’s Bank of England rate decision. The central bank appeared to hold off on cutting rates in July to give economic data a chance to respond to the referendum outcome. The BoE then not only reduced its benchmark lending rate to record lows, but also expanding its QE programme to £435 billion from £375 billion.

A similar situation unfolded in the S&P 500 in late July. Short exposure reached a 2 year high of 92 percent while the index climbed to record levels. Since then, the S&P 500 has been inching upward while SSI remained elevated on the short side.