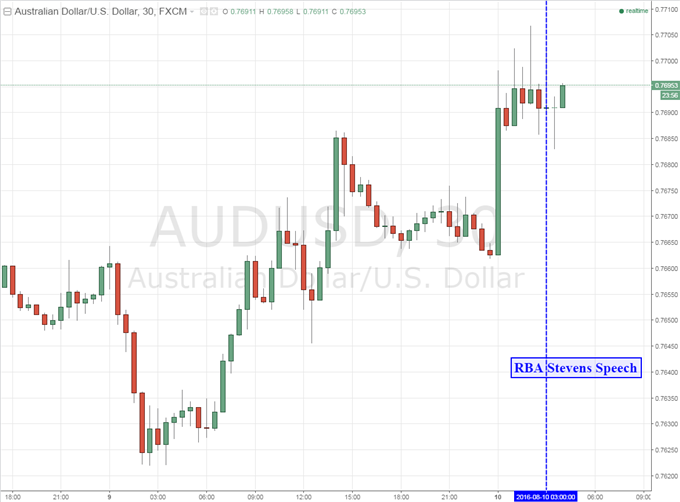 The Australian Dollar showed a reserved reaction against its major counterparts after Reserve Bank of Australia’s Governor Glenn Steven made a speech in Sydney. The presentation is his final address before being replaced by Deputy Governor Philip Lowe after nearly 10 years of service.

In the speech, Stevens highlighted the RBA’s accomplishment of achieving the 2 – 3 percent inflation target with an average unemployment rate between 5 to 6 percent. Commenting on economic growth, he said slower expansion is here and has been for a while. The Governor added that very low nominal GDP growth looms large because of the terms of trade decline.

Of particular note, the outgoing RBA chief mentioned the need for “realism” in regards to the effectiveness of monetary policy by itself. He added that more than adjustments to interest rates will be required to sustain stronger growth in the long run. He also noted that difficult choices are needed for budgetary adjustments.

Stevens did not appear give any surprising updates to monetary policy in regards to August’s interest rate decision. However, the DailyFX Speculative Sentiment Index (SSI) is suggesting that retail AUD/USD short positions outnumber longs by the most in over 3 months. The SSI is a contrarian indicator at extreme levels, implying further AUD/USDstrength ahead.