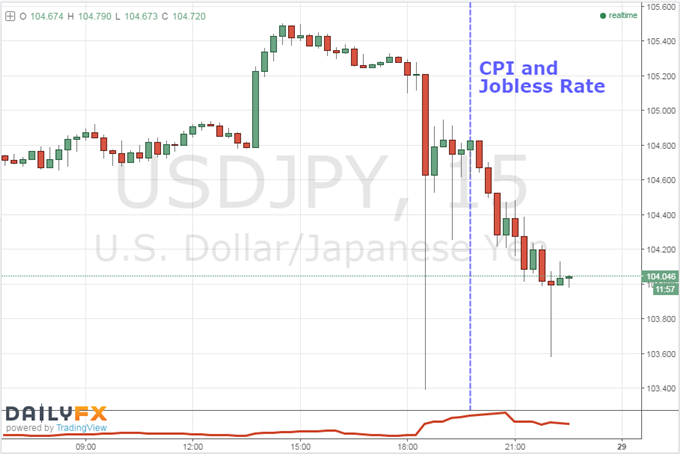 The Japanese Yen was unmoved against its US counterpart following the release of a broad range of Japanese data including weak June inflation figures and a drop in household spending that bolstered calls for QE. The round of data up for release was dense. There were indicators for unemployment, household spending, retail sales, consumer inflation and industrial production. The most encouraging statistics in this round was the jobless rate which was better than expected with a decrease to 3.1% from 3.2%. That marks the lowest unemployment figure since July of 1995. Industrial production would offer a little encouragement as well with a 1.9 percent climb that was much larger than the 0.5 percent forecast and a reversal from May’s -2.6 percent contraction. The good news seemed to end there.

On the other side of the ledger, there was plenty of discouraging data. The National Consumer Inflation numbers were generally in-line, but that was with in-line with figures well below the central bank’s objective. Despite the expansive QQE program from the BoJ and the recent adoption of negative rates in January, the headline year-over-year pace held at -0.4 percent price deflation. Excluding volatile fresh food and energy the expected downtick from 0.6 percent to 0.5 percent was sharper with a slowdown to 0.4 percent price growth. The central bank is attempting to permanently end deflation/disinflation and officially targets 2.0 percent. Other noteworthy disappointments include the -2.2 percent drop in household spending against an anticipated -0.4 percent and retail sales (year-over-year) that fell -1.4 percent in June against a -1.2 percent expected.

Seemingly, these figures have been overshadowed by a highly anticipated Bank of Japan monetary policy meeting. Given the Japanese Yen’s exceptional volatility since the Japanese Upper House election win for Prime Minister Shinzo Abe – and the strong appreciation since the introduction of negative rates six months ago – this meeting from the BoJ is expected to be lively. There have been extreme market movements from previous policy announcements from the BoJ and the potential for volatility is high as is born out in implied volatility measures referenced here.