The Canadian economy weakened more-than-expected in May after raging wildfires in Northern Alberta undermined oil production and disrupted employment.

The May Gross Domestic Product (GDP) report showed that the economy contracted 0.6% month over month and grew a marginal 1.0% on an annualized basis, trailing market expectations for a 0.5% m/m decline and a 1.2% y/y expansion. Although the economy lacks momentum, the largest decline in output since May 2009 is likely to be a one-off event amid the natural disaster. Economic activity will likely rebound in Q3, albeit at a very modest pace as reconstruction efforts in Northern Alberta get underway.

The report revealed that good producing industries fell 2.8% in May weighed primarily by a steep decline in mining and manufacturing, which fell 6.4% and 2.4%, respectively. In constrast, services producing industries grew 0.3% during the same period, lifted by a 0.6% rise in real estate and a 1.0% increase in wholesale trade.

All in all, the report will undoubtedly heighten concerns about the state of the economic recovery. Even as the most of the decline in activity in May can be tied to the Fort McMurray wildfires, the economic outlook for the remaining of the year is not very sanguine as the country continues to adjust to low commodity prices, low investment in the energy sector and falling exports.

Even as growth figures disappoint, the Bank of Canada (BoC) is likely to wait a little longer before taking on a more dovish stance as the the central bank has limited scope to act amid concerns about a potential housing bubble in Toronto and Vancouver.

Here’s a summary of the data that’s impacting the Canadian Dollar this morning:

Immediately after the series of GDP reports, USD/CAD took a nosedive, falling as low as 1.3120 as the U.S. GDP figures played a larger role in driving the market reaction. The USD weakness has largely resulted from the disappointing release, which showed the the world’s largest economy expanding an annalized +1.2% in the second-quarter versus forecast for a 2.5% expansion, with the subduded recovery undermining the Fed’s ability to raise the benchmark interest rates in 2016. 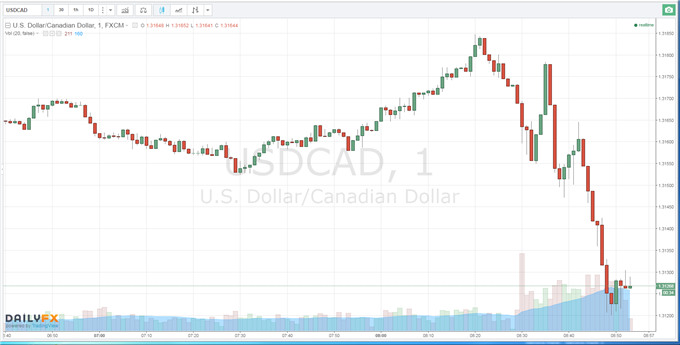