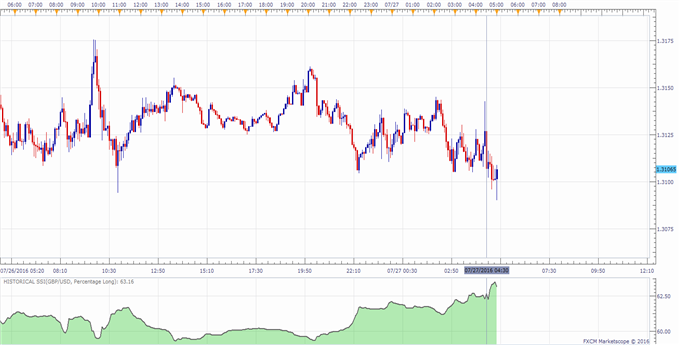 - Growth in the production industries increased by 2.1% in Q2

The British Pound traded lower versus other major currencies (at the time this report was written) after today’s Preliminary 2Q’16 Gross Domestic Product (GDP) figures showed the UK’s economy grew better than expected.

The ONS indicated that growth was boosted by the strong industrial output figures, and services which were mainly in April, and were little changed over the following two months.

This fact might suggest that pre-Brexit worries did make their way into the economy, but were offset by a strong performance in April.

Furthermore, given the fact that the data reflects input from mostly the pre-Brexit era it seems the upbeat numbers were unable to offset a generally negative outlook for the economy, with the first post-Brexit PMIs suggesting a contraction in the next quarter. MPC member Weale said the PMI figures are the best short-term indicator that the bank hasat the moment, and could prove significant for the rate decision next week.

Taken together, this could potentially explain the overall negative reaction by the British Pound.

The GBP/USD is trading around possible support at 1.3100 at the time of writing.

Meanwhile, the DailyFX Speculative Sentiment Index (SSI) is showing that about 63.1% of traders are long the GBP/USD at the time of writing. The SSI is mainly used as a contrarian indicator, implying weakness ahead.