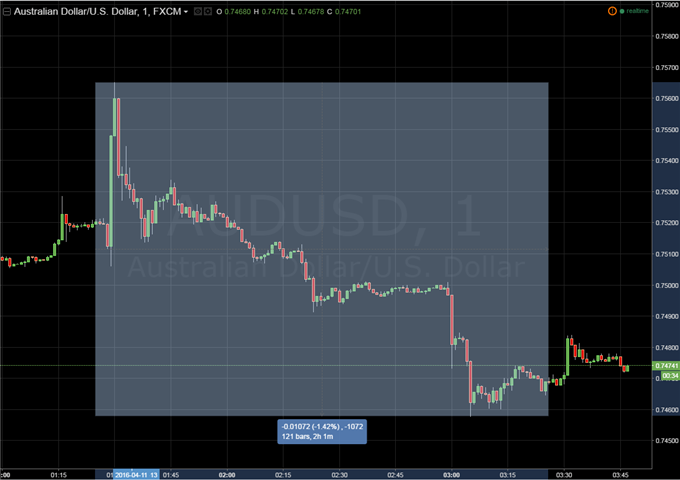 The Australian Dollar briefly rallied against its major counterparts after the quarterly 2Q Consumer Price Index (CPI) data came in line with expectations for a pick up from the previous slump. However, that advance quickly fizzled when the annual figures were reviewed. In the comprehensive ‘headline’ statistics, the QoQ CPI rose 0.4 percent as expected and compared to the -0.2 percent contraction the previous period. The ‘core’ trimmed mean figure through the same three-month period rose 0.5 percent to best the 0.4 percent forecast and pick up from the slow 0.2 percent reading from 1Q. It was the annual statistics that the RBA follows for policy though, and that is where the market would concentrate as well. The headline YoY pace slowed more than expected to a 1.0 percent pace (expected 1.1 percent and previous 1.3 percent) – matching the slowest clip in 18 years. The core figure’s YoY reading held at 1.7 percent unexpectedly (forecast for 1.5 percent) but that still matched a record low. After the sort-lived initial really, the AUD/USD tumbled over 100 pips or 1.4 percent.

In the Reserve Bank of Australia’s July statement following its rate decision, Governor Glenn Stevens noted that persistently low inflation is likely here to stay. The RBA cited labor market costs and downward pressures from elsewhere in the world for the lack of growth. The RBA lowered interest rates in May and twice last year to spur inflation and lending. Along with the RBA saying that a high Australian Dollar may complicate its ability to reach economic objectives, the CPI numbers may affirm the markets expectation for future rate cuts.