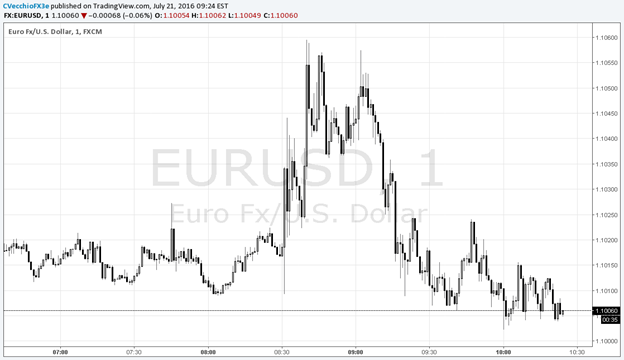 - ECB President Draghi set to speak at 12:30 GMT - follow in the DailyFX RTN.

ECB’s President Mario Draghi commented on the Governing Council’s underlying considerations after keeping the interest rate on the main refinancing operations, the marginal lending facility and the deposit facility unchanged. However, Draghi signaled that the GC is open, but not committed, to providing additional stimulus when they next meet in September when new projections for growth and inflation come out.

President Draghi has previously identified Brexit as a key risk that could shave up to 0.5% off Euro-Zone economic growth over the next three years. However, this time he indicated that the figure would depend on how long the negotiations would last. Brexit did not seem to have any effect on inflation expectations. He added that the financial markets and the banking sector have been rather resilient in reaction to the Brexit outcome.

Lastly, on the issue of Italian banks, Draghi addressed risk from non-performing loans and the non-performing exposures in the euro area. He indicated that a state-funded backdrop may be part of the solution to managing the significant problems of high levels of bad loans in the euro zone banking system. As stated previously, we think is a major area of concern for the Euro-Zone which will ultimately lead to a significant bank recapitalization (see the July 17 article, "Brexit's True Impact on Euro Will be Felt via the Italian Banking System").

The Euro rallied to new daily high at $1.1060 against dollar after ECB’s President Draghi called for structural reforms. The implementation of structural reforms are intended to reduce structural unemployment and boost potential output growth in the euro area, according to President Draghi. However, EUR/USD dropped back to $1.1000 level as the Q&A session ended; market participants may be reassessing the likelihood that the ECB acts in September.

The European Central Bank left interest rates and asset-purchase program on hold at its first post-Brexit meeting. Despite the uncertainty created by UK’s EU referendum, the ECB governing council has decided to remain in wait-and-see position.

The interest rates on the main refinancing operations, the marginal lending facility and the deposit facility remained unchanged at 0.00%, 0.25% and -0.40%, respectively.

The Governing Council confirmed that the monthly asset purchase program of €80 billion per month is intended to run until the end of March 2017, and would extend it if necessary.

Mario Draghi, President of the ECB, will comment on the underlying considerations of these monetary policy decisions at 08:30 EDT/12:30 GMT - you can follow his commentary live in the DailyFX Real Time News feed.

Read more: Preview for ECB: No Rate Cut Yet but Tweaks to QE Program Possible