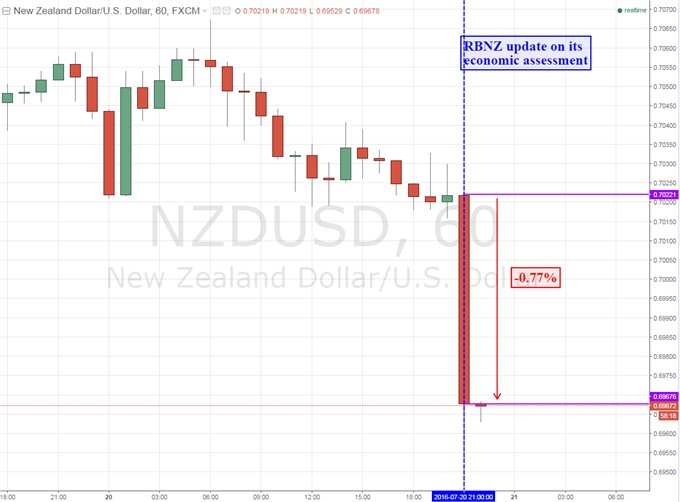 The New Zealand Dollar sank against its major peers after the Reserve Bank of New Zealand released an update of its economic assessment. The central bank conducted this report because there is a two-month gap between its June policy meeting and the next one in August. Heading into the report, there was a worse-than-expected CPI reading and adjustments to LVR restrictions which fueled speculation that the RBNZ will ease in the near term.

According to the report, the central bank came out and said that further policy easing will be required to ensure that future average inflation settles in the middle of its 1 to 3 percent range. The RBNZ added that monetary policy will continue to be accommodative and that they will closely watch incoming economic data. Commenting on the exchange rate, the Reserve Bank of New Zealand said that a decline in the New Zealand Dollar is needed as it is holding down tradable goods inflation.

As of this market alert, overnight index swaps are pricing in an 80 percent probability that the central bank will reduce its official cash rate by 25 basis points in August. Meanwhile, the markets are also expecting the RBNZ to cut rates at least twice over the next 12 months. New Zealand government bond yields tumbling underscores the markets dovish interpretation of the announcement and speaks to conviction in on-coming stimulus expansion expectations.

Meanwhile, the DailyFX Speculative Sentiment Index (SSI) is showing a reading of 1.1 following the announcement, meaning that for every short NZD/USD position, there are 1.1on the long side. The SSI is a contrarian indicator at extreme levels, implying further NZD/USDweakness ahead.