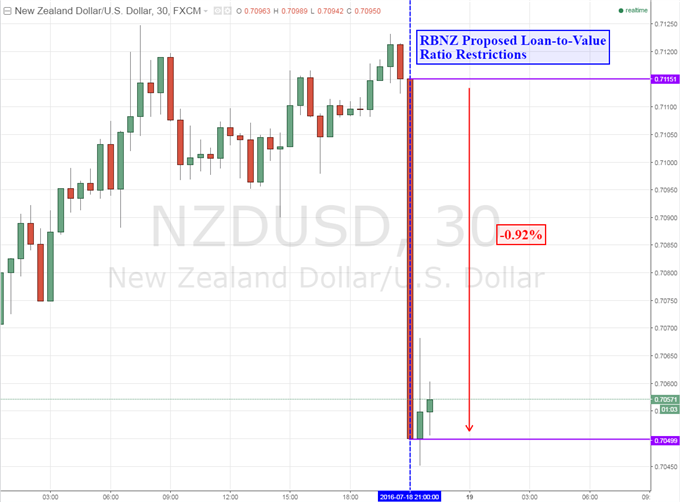 The New Zealand Dollar declined against its major counterparts after the Reserve Bank of New Zealand consulted on nationwide investor loan-to-value restrictions. According to the central bank, the limits that were implemented in Auckland back in late 2015 will now be broadened to impact the rest of the nation on September 1st 2016. These laws arise during a time in which building house price inflation is adding to financial stability concerns, as stated in the RBNZ’s most recent monetary policy announcement.

In addition to broadening the restrictions, new proposals also included limiting bank lending to residential property investment with an LVR of greater than 60 percent. To complement the announcement, the central bank’s Governor Graeme Wheeler said that the risk of a housing price correction has been increasing across New Zealand. He added that increasing investor lending has led to residential mortgages making up 55 percent of banking system assets.

As the report crossed the wires, New Zealand front-end government bond yields fell alongside the Kiwi’s decline. As of this market alert, overnight index swaps are pricing in an 80% chance that the Reserve Bank of New Zealand will cut rates by 25 basis points at their August monetary policy announcement. The markets are also pricing in at least 1 rate cut over the next year.

With that in mind, today’s announcement likely led to the markets believing that the central bank will reduce its official cash rate sooner rather than later. All else being equal, lowering interest rates will make it cheaper to finance lending to purchase a house. Without imposing restrictions, the central bank could risk an economic recession if a housing bubble bursts. Meanwhile, the DailyFX Speculative Sentiment Index (SSI) is showing a reading of -1.3 following the implying NZD/USD strength ahead.