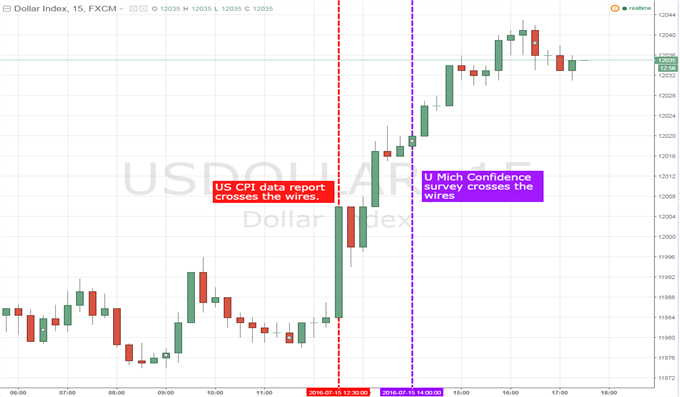 US Dollar Unmoved By Sentiment Figure Hitting Near 2-year Low

The US Dollar was unmoved by the University of Michigan’s Consumer Confidence survey, posting the most reserved outlook since August 2014. A better-than-expected June US CPI may have held to balance it. The headline sentiment numbers (considered one of the foremost indicators of US consumer sentiment) came in at 89.5, below the 93.5 estimate and the lowest reading since April. The ‘expectations’ component was of greater disappointment with a 77.1 reading that missed expectations of an improvement from the 82.4 reading in the June update.

Looking more closely at the details of the report, there were a range of interesting highlights. According to the report, the bulk of the slip in sentiment had come on the part of high-income households. That said, the Index of the household finances component would only slip modestly from the previous 15-year high with net income only easing back from a decade high while debt/assets reflects were much more restrained. Business expectations over the last year dropped to its lowest level since November 2013 with the outlook for the next year doing little better. For Fed watchers, rate expectations showed a net 57 percent of respondents expected them to rise – the most hawkish view since February 2015. That said, the 1-year inflation outlook jumped to 2.8 percent, but that does not turn the trend up from its five-year general down trend.

Just hours earlier, a better-than-expected June US CPI data lifted the US dollar and appears to have balanced the U. of Michigan survey impact. However, a low or falling U Mich sentiment value should not be ignored as it is considered to be an early indicator of economic activity. A lower index indicates that consumers may be losing confidence which in turn could decrease their intentions to spend and keep the world’s largest economy growing towards the higher corporate revenues and eventual Fed rate hikes that draws appetite to the US Dollar.