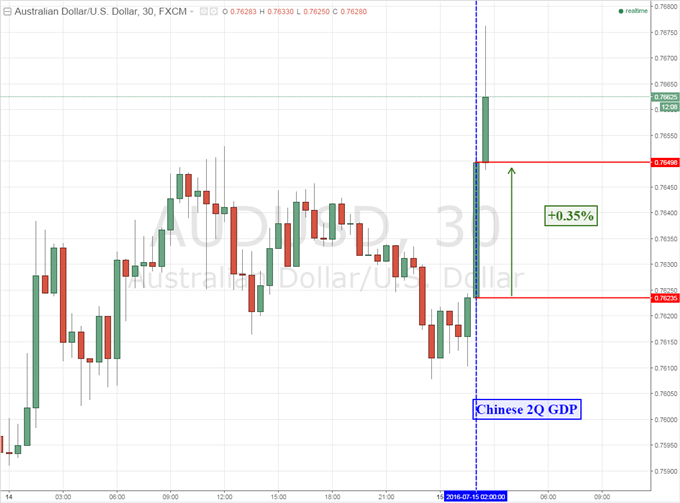 The Australian Dollar rallied against its major peers after China’s second quarter (2Q) GDP data crossed the wires. Between April and June this year, the world’s second largest economy grew 6.7 percent (YoY), better than the 6.6 percent estimate. In addition, the economy expanded 1.8 percent (QoQ) versus 1.6 percent expected. In March, China gave a target for GDP growth between 6.5 to 7 percent. Today’s report shows the parameters being met.

Being Australia’s largest trading partner, Chinese growth expansion can have a positive correlation for the nation’s economy. This can in turn cause the Reserve Bank of Australia to take action to favor a less accommodative monetary policy stance in order to subdue inflation as more capital flows between the countries. This is likely why Australian 2-year government bond yields rallied as the news was released.

While the markets are pricing in at least one RBA rate cut over the next month, China’s GDP figures appeared to subdue near term easing speculation. In other words, the markets likely interpreted the data may lead the central bank to cut rates later rather than sooner.

Meanwhile, the DailyFX Speculative Sentiment Index (SSI) is showing a reading of -1.27 following the announcement, meaning that for every longAUD/USD position, there are 1.27on the short side. The SSI is a contrarian indicator at extreme levels, implying further AUD/USDstrength ahead.