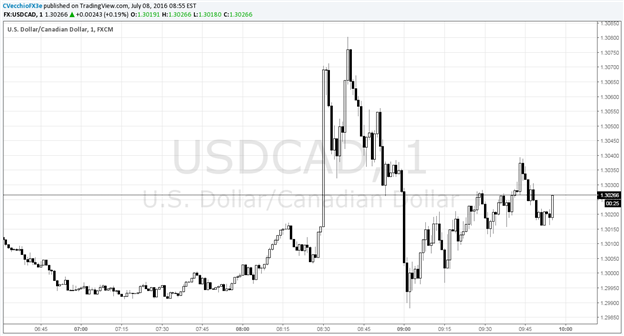 - Canadian employment falls by a mere -0.7K, well-below expectations of a +6.5K gain.

- USD/CAD rises post-Canadian employment release, but USD gains can be mostly attributed to June US NFPs.

Canada’s job market lost some of its recent momentum in June, StatsCan reported on Friday. The release showed that the economy lost 700 jobs, far below expectations for a net positive change of +6.5K. Despite the decline in payrolls, the national unemployment rate edged down to 6.8%, the lowest level in one year, from 6.9% the preceding month. Market consensus called for the jobless rate to rise to 7.0%. The decline in unemployment, however, can be attributed to a drop in the participation rate that fell to 65.5% from 65.7% in May as the number of people seeking work fell unexpectedly.

Beneath the headline numbers, the report showed full time employment fell by -40.1K but was offset by +39.4K increase in part-time employment, pointing to a decline in the quality of jobs being created in the economy. From the industry perspective, construction and manufacturing were the biggest losers shedding -28.7K and -12.9K jobs, respectively.

Meanwhile, the drag from low energy prices continued prompting employment in natural resources to decline by -1.6K. In contrast, the services producing sectors added +45.5K jobs with accommodation and food services increasing by +20.2K and trade rising by +12.5K.

It is important to point out that this report does not take into account the wildfires in Northern Alberta. Given the evacuation of more than 100,000 residents from the Fort McMurray area data was not collected from the region.

Here’s a summary of the data that’s moving the Canadian Dollar this morning:

Immediately after the report, USD/CAD pushed off of its daily lows and jumped to C$1.3080 from C$1.3015, in a knee-jerk reaction. The USDollar spike, however, could be mostly attributed to the positive US NFP surprise that revealed the US economy created +287K jobs in June, far above expectations of +180K, easing concerns about a deceleration in the pace of hiring in the largest economy worldwide, and began to revive Fed rate hike expectations. The USD, however, has retraced gains and was trading at C$1.3027 at the time of this writing.

Read more: Preview for June US NFPs and Outlook for USD-pairs, Fed Policy