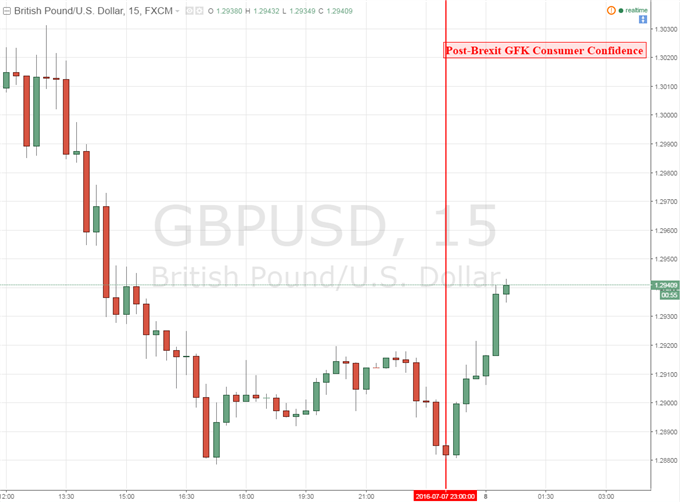 The British Pound offered a tepid response against its major counterparts after a post-referendum UK consumer confidence survey crossed the wires. The GFK sentiment index clocked in at -9 from -1 in June. This marks the sharpest drop in confidence since December 1994, and the lowest reading since November 2014. The Head of Market Dynamics at GFK, Joe Staton, said that every one of their key measures of sentiment declined.

According to the report, roughly 60 percent of participants expect the general economic situation to worsen in the upcoming year. This is up from 46 percent in June. Meanwhile, GFK said that 33 percent of respondents believe prices will increase rapidly in the next 12 months. This is up from 13 percent in June. GFK also added that they expect sectors such as travel, lifestyle, home, living, and grocery vulnerable to consumers cutting back on discretionary spending.

The “Brexit” outcome clearly lowered sentiment and the Bank of England’s first rate decision since the poll is next week. BOE Governor Mark Carney sees a possibility of easing monetary policy over the summer. In addition, a highly anticipated US jobs report will cross the wires tomorrow. Traders may be hesitant to take on Sterling exposure as they await high near term event risk and to see how the UK referendum translates into Bank of England monetary policy.

Meanwhile, the DailyFX Speculative Sentiment Index (SSI) is showing a reading of 2.3 following the announcement, meaning that for every trader short the GBP/USD, there are 2.3 on the long side. The SSI is a contrarian indicator at extreme levels, implying further GBP/USD weakness ahead.