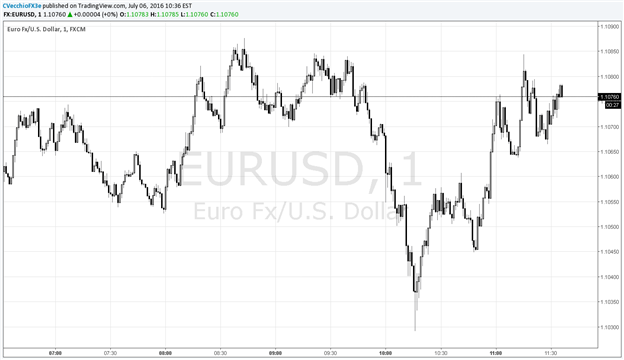 The June US Non-Manufacturing/Services Index registered 56.5 in June, 3.6 points higher than the May level of 52.9 – the largest single-month jump since 2008. The elevated reading now sits at its highest level since November 2015, after just previously hitting its lowest level since February 2014 in May. The report produced some outright bullish aspects – the headline was at its best rate in nine months, after all. The Business Activity subcomponent increased to 59.5 in June from the May reading of 55.1. The New Orders subindex registered 59.9, 5.7 points higher than 54.2 in May.

Despite some of the strong internals, the data has proven volatile; and along the way, it’s been augmented by one of the worst US labor market readings in recent history: the abhorrent +38K growth seen in May.The Employment subindex hit 52.7 after from the May reading of 49.7, which typically corresponds with jobs growth around 150-175K. Earlier in the day, the final June US Markit Services PMI showed the slowest hiring pace in 17 months in the service sector.

According to the ISM report, 15 (include Mining; Retail Trade; Real Estate, Rental& Leasing; Construction; Finance & Insurance; and Wholesale Trade) of the 60 non-manufacturing industries reported growth in June, and respondents’ comments are mostly positive about business and economy conditions.

Here’s the data moving the US Dollar this morning: