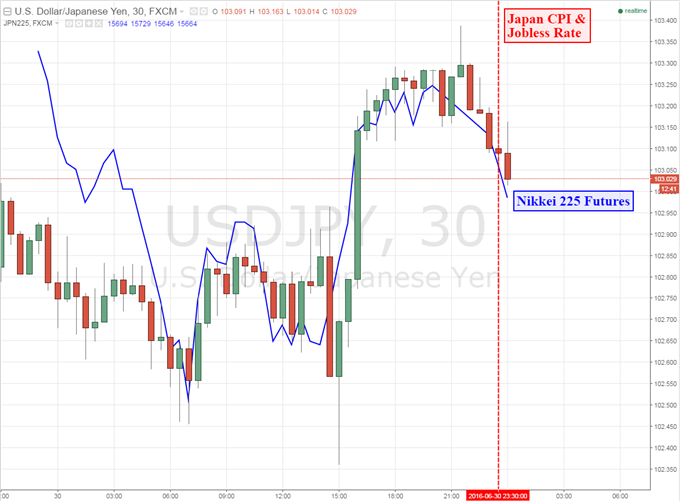 The Japanese Yen offered a tepid reaction to reports of in-line CPI and jobless rate readings. Heading into the announcement, the anti-risk Yen was keeping its sentiment orientation moving inversely to Nikkei 225 futures as risk aversion motivated a shift in speculative exposure.

Meanwhile, the jobless rate held steady as expected at 3.2 percent – a more than two decade low. The job-to-applicant ratio increased to 1.36, higher than the 1.35 estimate and more than the 1.34 reading in April. All else being equal or “ceteris paribus,” there are seemingly plenty of jobs to absorb new entrants to the labor force and maintain the jobless rate at low levels. The job-to-applicant ratio has been recovering from 2009 lows and now stands at its highest point since 1991.

In its most recent monetary policy announcement, the Bank of Japan did not give any imminent stimulus expansion hints, however the threat has been raised in unofficial remarks regularly. In context of this market alert, the central bank lowered its expectations for near-term inflation. However, the long-run outlook is for prices to reach 2.0 percent some time in 2017. This could explain why the Japanese Yen failed to show a significant reaction to today’s lackluster CPI report.

Meanwhile, the DailyFX Speculative Sentiment Index (SSI) is showing a reading of 2.7 following the announcement, meaning that for every one trader short the USD/JPY, there are 2.7 holding long exposures. The SSI is a contrarian indicator at extreme levels, implying further USD/JPY weakness ahead.