- USD/CAD falls to C$1.2940 after report but lacks momentum to sustain gains.

Earlier today, Statistics Canada released the April GDP figures. The data showed April GDP was mostly in line with market consensus and grew +0.1% m/m and +1.5% y/y, from -0.2% m/m and a revised +1.2% y/y in March. The bulletin breakdown revealed that in the month of April, service producing industries were the main driver of economic activity, growing +0.2% m/m. Goods producing industries limited overall economic expansion by falling -0.1% m/m weighed by a -1.4 % m/m dropped in mining output.

Although the data is easing some immediate concerns about the slow pace of economic growth, any positive sentiment generated by this report is not likely to last long, especially as May GDP figures are poised to show an abrupt contraction in output following the wildfires in resources-dependent Alberta that severely disrupted oilsands operations.

All things considered, the unimpressive report is paving the way for a very soft second quarter as the housing sector is showing signs of cooling. Even though said impacts are transitory, they don’t give policymakers any leeway in the near-term. As a result, BoC will likely remain on the sidelines for the remaining of the year while maintaining monetary policy as accommodative as possible to spur spending and to stimulate business investment, especially at a time of high global uncertainty in the wake of the UK referendum vote. 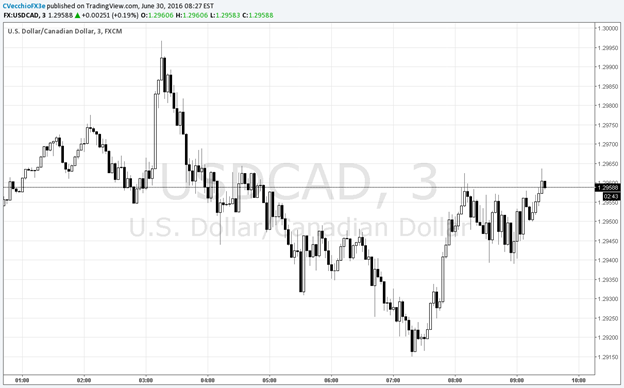 Immediately after the monthly GDP Report, USD/CAD pushed lower touching C$1.2939. However, the Loonie has been unable to sustain gains and has moved back towards C$1.2950 at the time this report was written amid lower oil prices and end-of the month rebalancing.

Canadian GDP figures for April are due out shortly, offering traders an opportunity to look away from the political mess in the UK, at least for a short while. According to Bloomberg News, the consensus forecast for April GDP is for it to rebound marginally by +0.1% m/m and +1.4% y/y, from -0.2% m/m and +1.1% y/y in the preceding month.The results likely will have been undercut by a weak performance of the mining sector that has struggled to bounce back amid depressed energy prices.

Although the market anticipates a slight pick-up in economic activity for the month of April, any improvement will be short lived as May GDP results are poised to show a sharp contraction in output following the Alberta wildfires that forced the evacuation of more than 80,000 people thereby disrupting oil production and employment activity.

In any case, April GDP numbers are unlikely to significantly alter investors’ sentiment and the present market narrative generated by the UK referendum vote. Prolonged risk-off mood should continue to cap any major upside for the Canadian Dollar as well as commodities. At the same time, Bank of Canada may be compelled to keep rates low for longer than expected due to downside growth risks. Although market skittishness seems to be easing, volatility is far from over after the Brexit fallout wiped out ~$3 trillion in global equity markets. 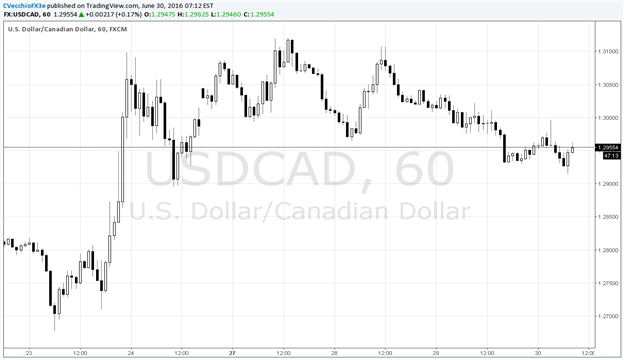