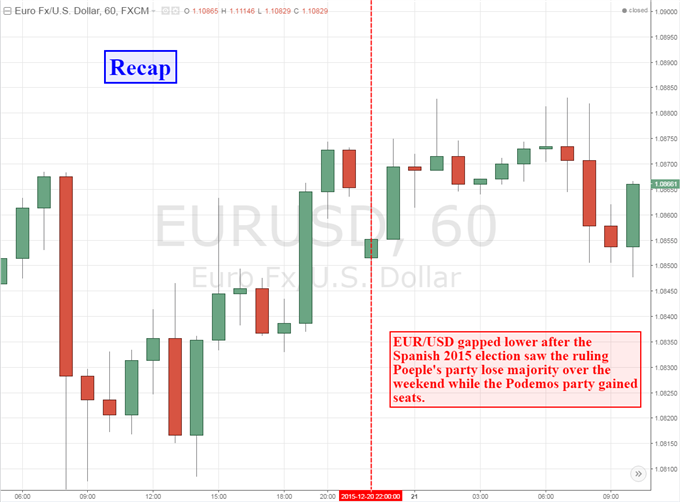 Anti-EU Sentiment in Brexit to Hang Over Weekend Spanish Election

Having trouble trading in such volatile market conditions? This may be why.

In December 2015, Spain conducted a general election. The outcome saw the People’s Party (PP) lose its majority and subsequently slow political progress. Prime Minister Rajoy’s campaign failed to secure the 176 seat threshold needed for a ruling majority in the 350-member parliament. In addition to the Euro gapping lower across the board following the results, Spain’s parliament was left fragmented and a new election was called to be held on Sunday the 26th, 2016.

The timing of this event so happens to fall in the aftermath of a United Kingdom referendum vote in which the country decided to leave the European Union. This is the first member to ever leave the European Union since its inception, though last year’s “Grexit” situation - in which the anti-austerity Syriza party rose to power in Greece and nearly fulfilled its campaign to quit the EU - came close. Since then, there has been a rise in Eurosceptic sentiment within Spain and throughout Europe.

Known as Podemos, the left-wing political party considers its mission is to address economic malaise by renegotiating austerity measures. In December, Podemos ended up with 69 electoral seats in parliament while the People’s Party had 123. Leading up to this year’s election, the anti-EU party merged with several other factions forming the Unidos Podemos alliance. According to The Economist, Podemos will overtake the Socialist party to become the main force on the Spanish left if polls are correct.

Now that the United Kingdom has taken its first step in breaking away from the European Union, concern will build that more anti-EU campaigns will gain traction. As Currency Strategist Ilya Spivak pointed out, Brexit’s success may embolden Eurosceptic forces elsewhere such as in Spain and France. Much like last time, the rising threat of a leftist coalition in Spain could lead to further austerity uncertainties down the road for the EU’s now fourth largest economy (fifth if the outgoing U.K. were included).