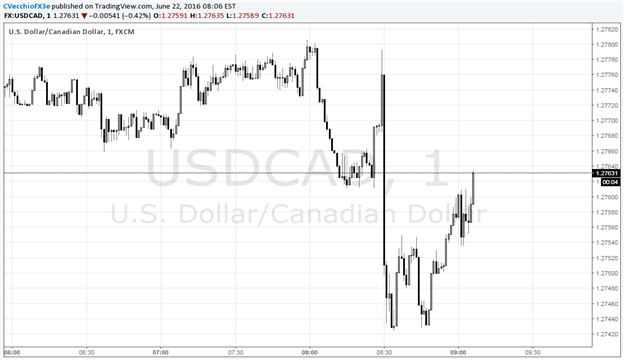 April Canadian Retail Sales came in above market expectations at +0.9% m/m after contracting by -0.8% m/m in March, providing a boost to the Canadian Dollar (weaker USD/CAD). The data come in a context of slowed economic growth hamstrung by depressed ebergy prices, but where confidence indicators are starting to bounce back.

Although encouraging, the data is not likely to change the discourse on monetary policy or the immediate path of interest rates. The Bank of Canada should remain neutral in the months to come as fiscal stimulus kicks in and the economy attempts to take advantage of low borrowing costs.

Here are the headline report figures driving the Canadian Dollar this morning:

It is important to point out, however, that retail trade data for the month of May could come in on the soft side after a raging wildfire in Northern Alberta forced the evacuation of more than 80,000 people – a clear disruption to daily life, mining production and employment activity, which translates into weaker economic growth. According to the BOC’s assessment, the fire-related devastation will cut approximately 1.25% off real GDP in Q2, but will ultimately prove to be a temporary setback for the Canadian economy that remains on a slow recovery path.

Following the release, USD/CAD slumped from C$1.2776 to as low as C$1.2743 as the improved spending data suggests Canadian growth prospects are improving. However, with FX markets generally volatile and – no other way to put it – ansy ahead of the UK-EU referendum result, the move was quickly reversed as general US Dollar strength was observed. Generally speaking, news pertaining to a “remain” vote have proved positive for risk assets, and thus, the Canadian Dollar. USD/CAD traded at C$1.2763 at the time this report was written.