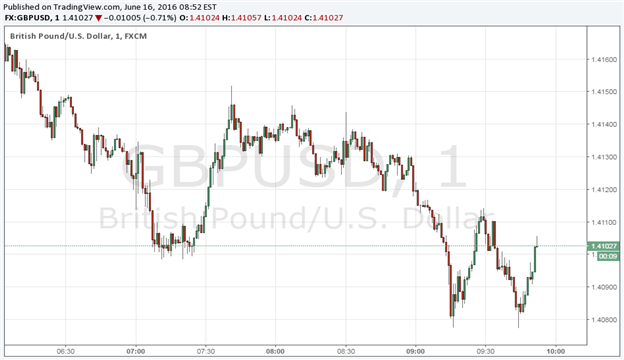 Brexit Risk in Focus as BOE Holds Rates, Warns on Risks to Economy

- Minutes reveal consensus that overhand of Brexit uncertainty is hurting the UK economy.

Earlier today, the Bank of England held its main interest rate unchanged at 0.50% as expected, where its been since March 2009, while concurrently leaving its asset purchase plan at £375 billion. The Bank of England’s Monetary Policy Committee sets monetary policy to meet the medium-term +2% inflation target, and with 12-month CPI inflation was +0.3% in May, it remains well below the +2% inflation target. The shortfall is predominantly due to the ongoing drags from energy and food prices (though said influences should dissipate by end-of-year).

The main point of focus, however, was regarding uncertainities surrounding the referendum vote that will take place next Thursday, June 23. This was has had the effect of leading to “delays to major economic decision,” according to BOE Governor Mark Carney. Governor Carney emphasized the potential impact of the UK’s referendum to leave the European Union. The MPC said that “a vote to leave the European Union could materially affect the outlook for output and inflation.” Market chatter has been swirling about a potential BOE rate cut in the event of a Brexit, which may be contributing to the Sterling’s weakness over the past few weeks as Brexit odds have risen.

With the Federal Reserve saying on Wedneday that the referendum was factored in its decision to remain interest rates unchanged, and the Swiss National Bank and the Bank of Japan keeping their rates unchanged, the Bank of England emphasized that the referendum was having an increasingly widespread impact on the global economy. The MPC added that the vote remains the “largest immediate risk facing U.K financial maket, and possibly also global financial markets.” Indeed, other central banks could lose credibility around the referendum, depending upon the outcome and their subsequent responses.

In the wake of the release, the British Pound extended its declines on the day, heading toward a two-month low against the US Dollar at $1.4078, trading lower by down -0.71% at the time of writing. The Speculative Sentiment Index (SSI) read +1.914 at last check, with retail traders 66% long and 34% short, suggesting a bearish bias to the pair. Learn more about and follow SSI in real time here.