-FX volatility set to remain high with FOMC and Brexit vote next two weeks - it's the right time to review risk management principles to protect your capital.

On approach to the June 23 UK-EU referendum, more and more British politicians are making airwaves to try and sway the UK populace. Today, it was Chancellor of the Exchequer George Osborne’s turn, offering nothing but a forecast of painful austerity should a Brexit vote materialize. Ahead of his public appearance today, the Chancellor wrote that a Brexit would lead to a “profound economic shock that would hit the economy and could tip Britain back into recession.”

Chancellor Osborne announced that an emergency budget is being drawn up to plug a £30bn budget hole in case Britain votes to leave the European Union. Overall, Mr. Osborne threatened to raise income tax and inheritance tax rates as well as cutting health and schools spending (NHS) in the event of a Brexit. He said he would need to raise the basic rate of income tax by 2%, higher rates by 3% and add 5p in the pound to the 40% inheritance tax rate. In addition, alcohol and fuel duties would need to rise by 5%. On the spending side, the National Health Service, education, and defense spending would cut 2%, and there would also be reductions to pensions, the home office, policing and transport. All of this amounts to several more years of austerity for the UK voter.

As expected, the ‘Leave’ campaign has come out and slammed the remarks. The BBC is reporting that up to 57 MPs have come out to take a stand against Chancellor Osborne’s austerity proposal. In turn, the Leave campaign today issued a tentative road map for governance in the event of a Brexit vote materializing.

The Leave campaign’s roadmap is an effort to reject claims that Brexit would lead to the dark and call for immediate action to take back control from the EU. It wanted to introduce a Finance Bill that would abolish the 5% of the Value-Added Tax (VAT) on household energy bills by amending the Value Added Tax Act 1994, and it would be paid for by savings from the UK’s contributions to the EU budget.

The National Health Service would receive a £100m per week real-terms cash “transfusion,” to be paid for by saving from leaving the EU. Vote Leave would amend the Asylum and Immigration control bill by “[ending] the automatic right of all EU citizens to enter the UK.” On the Free Trade Bill, the UK would leave the EU’s common commercial policy to “restore the UK government’s power to control its own trade policy.” Lastly, the European Communities Act 1972, “the legal basis for the supremacy of EU law in the UK,” will be repealed and European Court’s jurisdiction over the UK will end.

Such a plan is a direct attack on the Dave Cameron government, directly implying that it would lose legitimacy in the face of a Brexit and would no longer be suited to govern. In a sense, the Leave campaign is acting like the shadow government. But this is far from the reality: the UK-EU referendum is not legally binding. Low voter turnout or a small margin for a ‘leave’ vote could easily be dismissed by the Cameron-led government. Even in the event that the referendum were accepted, it would need to be ratified into law by Parliament - which, considering that the opposition Labour Party has said it will not support a vote to leave, a Brexit (in reality, not as the media is misconstruing it) is still far from guaranteed. 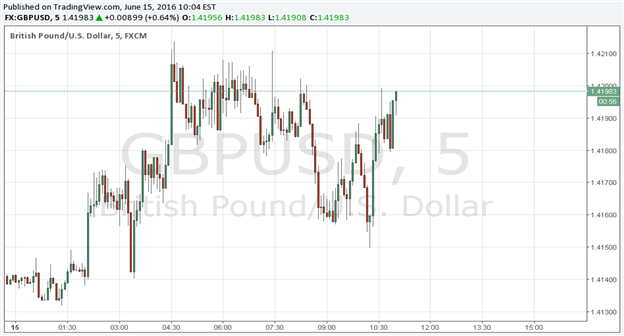 GBP/USD has traded slightly higher today, up by +0.64% at the time of writing. However, movement in the pair may not be directly attributable (one way or the other) to developments around the Brexit vote; the US Dollar has been generally weaker all day in the run-up to the June FOMC meeting. The Fed’s policy statement is due at 18:00 GMT.