The British Pound declined against its major peers near the end of last week after an ORB research poll on the “Brexit” referendum crossed the wires. The ballot showed a shift in majority sentiment with 55 percent of voters wanting to leave, and 45 percent wanting to stay. Over 80 percent of respondents agreed that leaving the European Union (EU) would pose either some risk or a great deal of risk to the United Kingdom (UK).

Polling data in recent weeks has been key for Pound traders as the “Brexit” referendum has grown to become one of the largest pieces of event risk this year. A vote to leave on June 23rd will not lead to an immediate departure from the EU. It would begin the multi-year negotiation period on the terms of exiting the European Union.

Three major polls by the end of May showed mixed results on the majority’s bias, with some revealing a tie and others showing minor leads for either side of the debate. The most substantial of the ballots, by sample size of surveyed people, was the ICM poll done by the Guardian. The poll reached out to a total of 3,056 people and found that in both online and phone surveys the choice to leave led by roughly 8 to 9 percent. The significantly smaller ORB poll was done during the same period and showed a larger lead for the vote to remain. The YouGov poll on the other hand showed a tie.

Between May and June the polling data from multiple sources showed no clear winner as there were contentious results. The table below shows the major polling results over the last month. 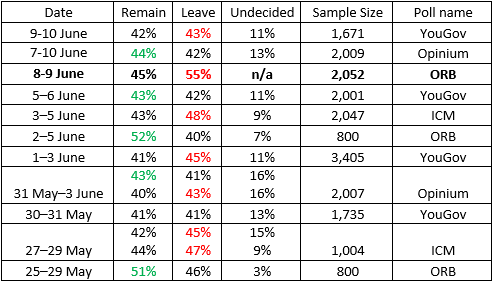 In early Asia trade on Monday, the British Pound continued its decline against its major peers. Over the weekend, two more EU referendum polls crossed the wires. One conducted by Opinium showed that 44% backed to remain while 42% voted to leave. Then, a YouGov survey showed that 43% wanted to leave while 42% backed staying in the UK. Relative to last week’s ORB poll, neither of the 2 showed a significant skew towards one outcome.

As Quantitative Strategist David Rodriguez mentioned, the British Pound is bracing for massive volatility in the two weeks ahead as we near the “Brexit” referendum vote. GBP 2-week implied volatility versus the US Dollar has surged to levels above during and after the Great Financial Crisis of 2008. Without an immediate clear-cut catalyst to the sterling’s decline in early Asia trade, this highlights the difficult trading conditions surrounding GBP crosses in the near-term. 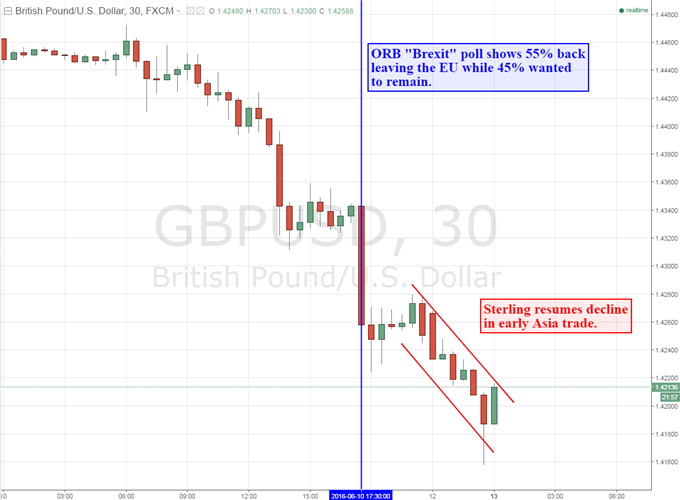