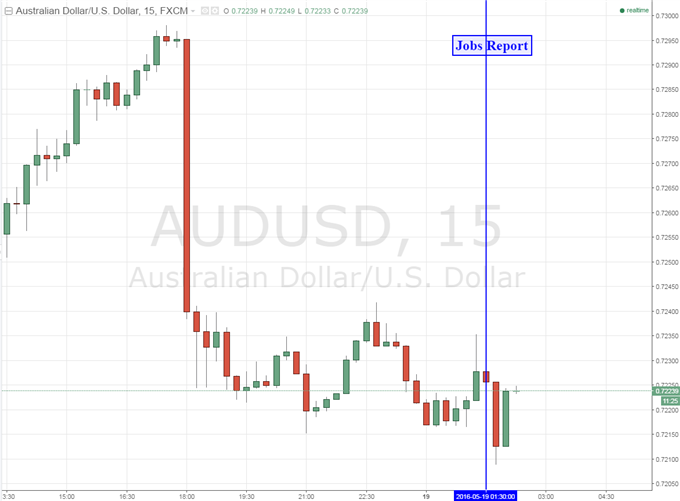 The Australian Dollar showed a tepid response against its major counterparts after Australia's employment report crossed the wires. The data showed10,800 jobs were added in April, which was worse than the 12,000 gain expected. The prior figures were revised lower from a 26,100 position increase to a 25,700gain.

Most of the jobs added were in part-time roles increasing by 20,200 positions. Meanwhile, full-time jobs contracted by 9,300 workers. The unemployment rate beat the 5.8 percent forecast, remaining at 5.7% which is the lowest level since September 2013. The labor force participation fell to 64.8% in April from 64.9% in March, lower than the 64.9% expectations. In other words, fewer people were left without a job, but more people left the labor force all together.

Earlier this week, the Reserve Bank of Australia released the minutes from the May monetary policy announcement. The document revealed that the central bank was close to opting against a cut and decided to proceed somewhat halfheartedly. Overnight index swaps are now pricing in an 11 percent probability that the RBA will cut rates in June, down from 20% last week.

Meanwhile, the DailyFX Speculative Sentiment Index (SSI) is showing a reading of 2.0 following the announcement, meaning that for every trader short the AUD/USD, there are 2.0 on the long side. The SSI is a contrarian indicator, implying further AUD/USD weakness ahead.