See the DailyFX Analysts' 2Q forecast for the Japanese Yen along with their favorite 2016 trading opportunities on the DailyFX Trading Guides page.

Japan’s economy returned to growth through the first quarter (1Q) of 2016. However, the optimism this data may otherwise supply is significantly diminished by the volatility in the economy’s performance figures and a perpetual diversion from monetary policy and intervention threats.

In the official GDP figures, Japan grew 1.7% on an annualized basis through the quarter. That was significantly better than the 0.3% pace expected and much more encouraging than the unfavorably revised -1.7% contraction from the previous quarter. The quarter-over-quarter figure similarly beat expectations with a 0.4% clip of growth versus the 0.1% expected; while nominal GDP met expectations of a 0.5% expansion following the previous periods -0.2% contraction. As can be seen in the chart below, Japan’s economy is prone to significant swings in data. 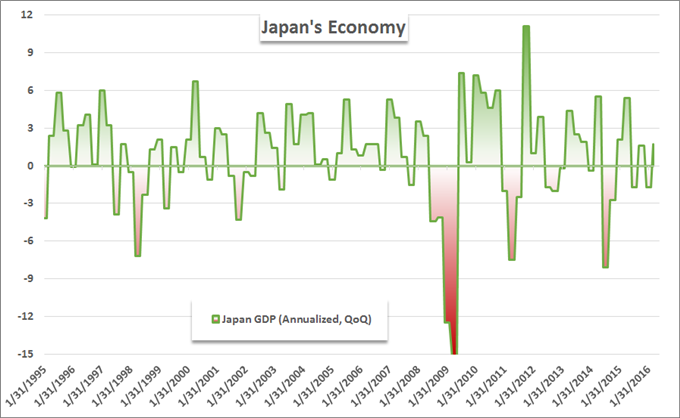 Looking into the details of the report to extract a sense of deeper conviction for trends moving forward, there was a noteworthy improvement in consumer spending. According to the ‘adjusted real growth’ table, household spending grew 0.5%. Steady and progressive growth in consumer spending would be a boon for the world’s third largest economy, but there is little of that consistency seen in monthly data. In fact, recent updates on this front are more discouraging amid debates over whether the government should go through with the second sales tax hike planned to work down the country’s bloated debt. 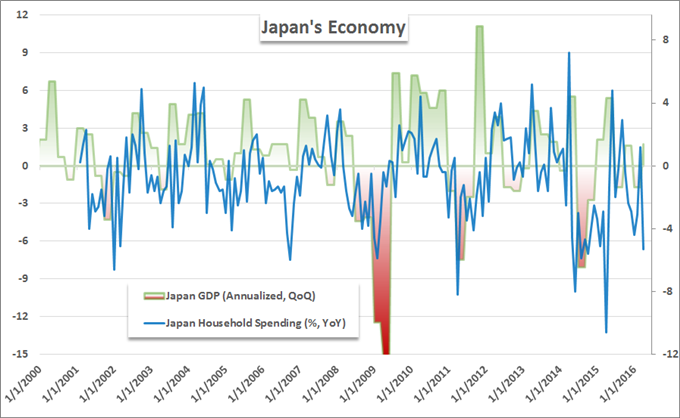 There are many economists and policymakers that are looking to trade to fill in for any shortage of domestic sources of expansion. Details on the trade figures are not available in the growth report, but exports under the ‘public investment’ item grew 0.6% while ‘Trading gains/losses’ grew 19.2% (though this series is quite volatile). Exports have not offered a strong backdrop however in the monthly data (seen below). This is one serious deficiency that those supporting an intervention on behalf of the Yen point to. 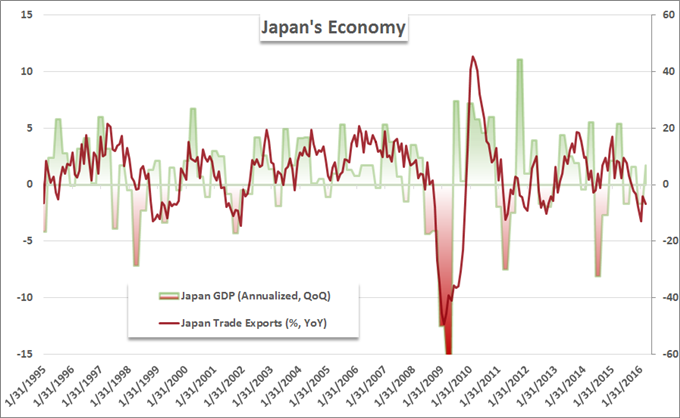 The lack of serious progress in consumer demand and exports translates into the economy’s inability to facilitate robust and persistent growth. It in turn further increases the dependency on government spending - which grew 0.7% through the period – and encourages policy authorities to seek out alternative solutions in monetary policy. Both the Government and Bank of Japan have repeatedly threatened intervention on behalf of the currency. While this is ostensibly motivated by preventing volatility in the exchange rate, it is clearly concerned with keeping the Japanese Yen lower. While officials have suggested that they have the full support of the G-20 in this effort, the G-7 meeting scheduled Thursday through Saturday may challenge that assertion. 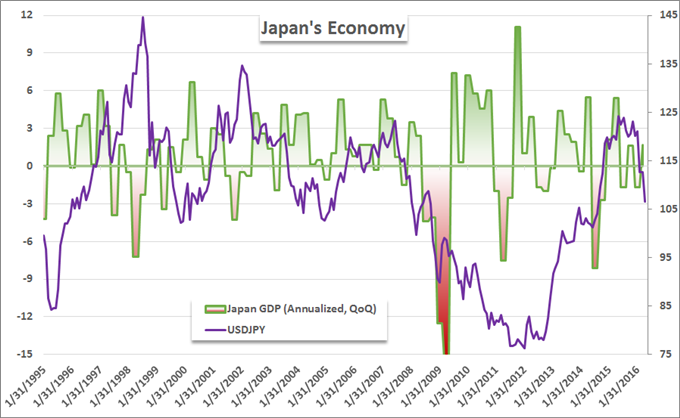 Monetary policy is another outlet for extra-ordinary support for the struggling economy. Inflation targets continue to elude officials (see CPI and core CPI below) despite the adoption and upgrade of its QQE program as well as its adoption of negative rates. 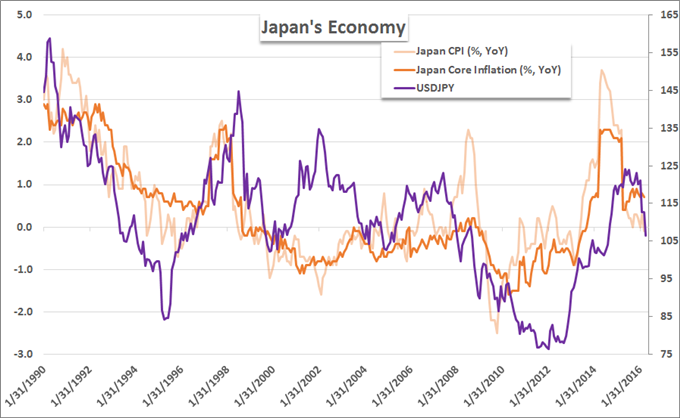