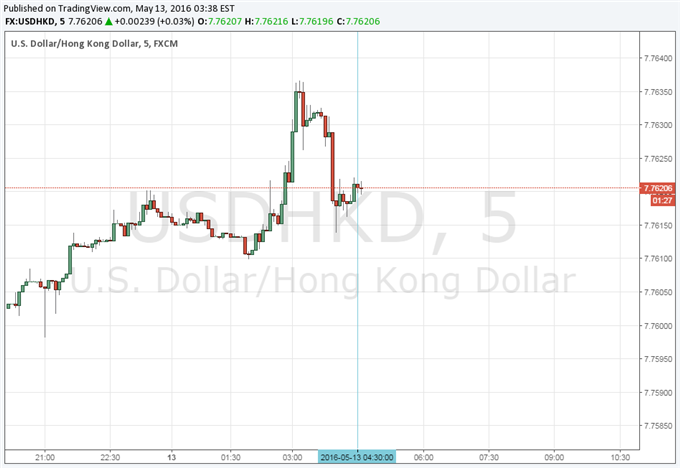 The Hong Kong Dollar was unchanged versus the US Dollar (at the time this report was written) after today’s Preliminary 1Q’16 Gross Domestic Product (GDP) figures showed Hong Kong’s economy contracted in Q1 of 2016.

On a seasonally adjusted quarter-to-quarter comparison basis, GDP decreased by 0.4% in real terms in the first quarter of 2016 when compared with the fourth quarter of 2015, surprising economists who expected an expansion by 0.75%. The reading was below the prior figure of +0.2%. The year-on-year figure came at +0.8%, below the prior +1.9%, and below the expected +1.5%.

Hong Kong's total exports of goods deteriorated by 3.6% from a year earlier. Exports of services posted a year-on-year decline of 4.9%, inflicted by a sharper drop in visitor arrivals, weaker visitor spending, and by sluggish cargo and trade flows.

As was mentioned a month ago by DailyFX Currency Analyst Renee Mu, the slowdown in the Chinese Economy has hurt the Hong Kong’s economy as well, mainly by reduced tourist arrivals from the mainland to Hong Kong which hurt the Hong Kong retail and real estate sectors. Taking this into consideration, the fact that the report signaled a contraction with a sharp drop in visitor arrivals, may put the focus again on China’s slowdown.

DailyFX Chief Currency Strategist John Kicklighter recently said that the Chinese GDP figures came generally in line with expectations, and the Hong Kong figures could be used as a good way to cross check the Chinese figures. In this context, the HK figures showing a contraction in Q1 might raise some questions.

The HKD is confined to a controlled range, billed as peg to the US Dollar. In 2005 the Hong Kong Monetary Authority (the equivalent of a central bank) decided to intervene on the currency market should the HKD advance beyond 7.7500 or slide below 7.8500 versus the US Dollar. At the beginning of the year, the pair set an eight year high on a sharp rally that seemed to threaten the peg at the time, but the HKD has since retraced near the higher bound (in HKD terms). With this in mind, the figures didn’t seem to have a very market moving reaction and the HKD was unchanged versus the US Dollar on the news.