Having trouble trading in the FX markets? This may be why.

Amid the ongoing debate in the UK over the pros and cons of an exit from the EU, the Treasury and Bank of England have not kept silent. On April 18th the Treasury released a report detailing the economic risk to the UK from a potential “Brexit”, as well as a comparison of the country’s current trade policies and alternatives in the case of an exit from the single market. The report suggested that the three most logical trade alternatives for the UK would hurt GDP and labor growth over the next 15 years.

Chancellor of the Exchequer George Osborne came out in defense of the report Wednesday and commented on the significant event risk being created by the threat of a Brexit in the markets. In his address to Parliament he said “I think there would be very significant financial volatility around a vote to leave”. Osborne also said that the BOE and the Treasury are seriously considering contingency options to undertake around the time of the vote. In March, the BOE decided it would offer three additional indexed long-term repo operations around the time of the referendum vote, June 23rd, to help bolster liquidity. The move by the BOE would increase the repos from the usual once a month to 4 for that month.

Economic data going into the EU Referendum (‘Brexit’ vote) remains mixed with the most recent NIESR GDP estimate showing growth at 0.3 percent, slightly cooler than the 1Q actual GDP growth rate of 0.4 percent – itself the slowest pace of expansion in three years. The unemployment rate remains steady at 5.1 percent which is a 10 year low. In the Treasury report, there are 3 suggested trade models that would be viable alternatives; and they are all expected to have a negative impact on both GDP, employment and the inflation rate. The uncertainty of a vote to leave the EU has been cited as cause for the markets remaining on edge as the referendum date approaches. This uncertainty can be seen below in the 2 month implied volatility levels for GBPUSD, which have risen sharply over the last 2 months. 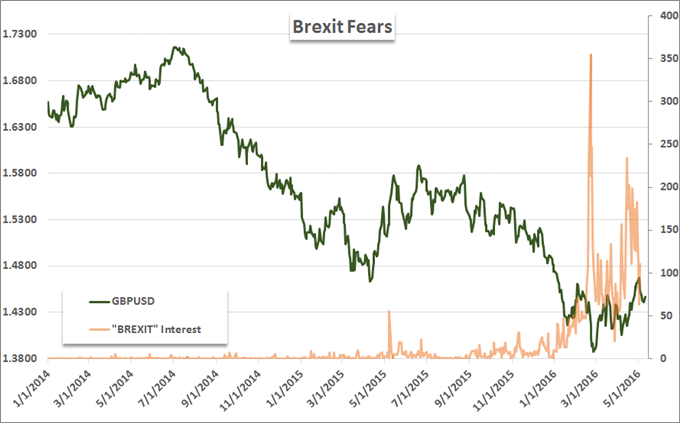 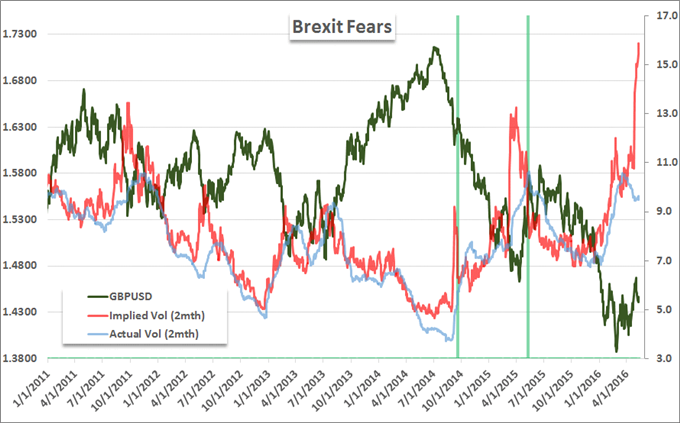