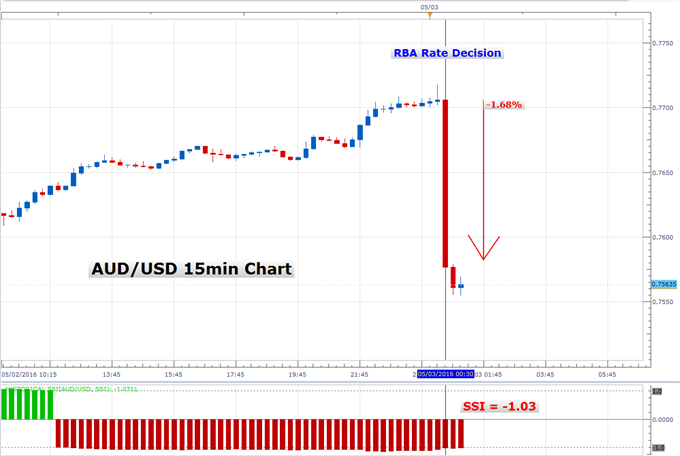 The Australian Dollar declined against its major peers after the Reserve Bank of Australia cut rates for the first time since May 2015. Heading into the announcement, economists were expecting the central bank to leave rates unchanged at 2.00 percent. However, overnight index swaps were pricing in a 55 percent probability of a 25 basis point cut. This meant that regardless of the outcome, half of investors would likely have been caught on the wrong side of the tracks.

Diving into today’s monetary policy announcement, the central bank mentioned that inflation has been low for some time and that recent data was unexpectedly low. Members noted that in part, this pointed to a lower outlook for prices than previously forecasted. Inflation aside, the central bank said that the domestic economy is continuing to rebalance and that indications point to continued GDP growth in 2016. Outside of Australia, members noted that recent actions by Chinese policymakers are supporting the near-term outlook.

Following the announcement, overnight index are pricing in a 100 percent chance that the Reserve Bank of Australia will cut rates again by 25 basis points at its next meeting in June. As for the next 12 months, investors envision a 98 percent chance of two rate cuts. With that in mind, inflation-related news could be in the spotlight for policy makers.

Meanwhile, the DailyFX Speculative Sentiment Index (SSI) is showing a reading of -1.03 following the announcement, meaning that for every trader long the AUD/USD, there are 1.03 on the short side. The SSI is a contrarian indicator, implying further AUD/USD strength ahead.