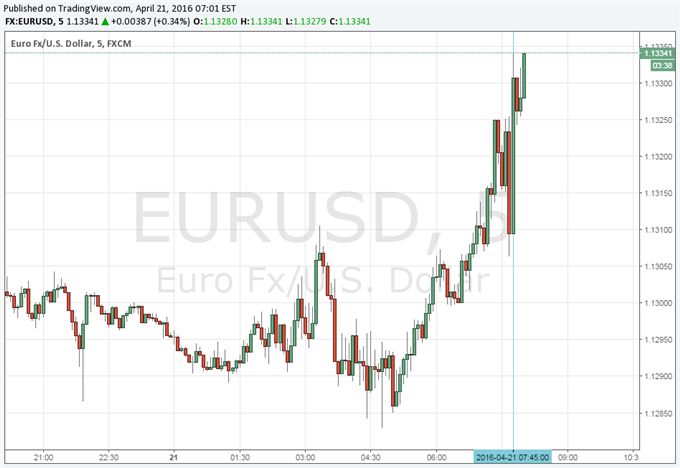 The Euro traded slightly higher versus other major currencies (at the time this report was written) after today’s ECB rate decision, in which the central bank decided to keep monetary policy at status quo. The benchmark interest rate on main refinancing operation was left unchanged at 0.00%, as was expected by economists.

The ECB also kept the Deposit Rate at -0.40%, in line with expectations. The Marginal Lending Facility was kept at 0.25%. The central bank also signaled that the monthly purchases under the asset purchase programme (QE) have started to expand to the €80 billion per month announced at the prior meeting.

As was recently mentioned by DailyFX Currency Strategist Christopher Vecchio, the expanded QE program only began on April 1 while the TLTROs have yet to. Given these facts, it was widely assumed that the ECB will keep policy unchanged as the impact of their prior decision is being examined. This puts the focus on Mario Draghi’s press conference for clues as to what the central bank will do next.

If Draghi uses the press conference to stress unambiguously that the ECB has ammunition to deliver greater easing if necessary, the Euro may weaken. It seems that until the press conference begins and more details are revealed, the market interpreted the lack of surprises in stimulus measures as sufficient to initiate a positive response, and the Euro traded higher versus other majors.

EUR/USD has edged higher around ECB President Mario Draghi's press conference, running up towards $1.1400 shortly after the commentary hit the newswires. Despite pledging to keep rates at their current level or lower, the Euro was particularly impact when President Draghi said that inflation would move higher towards the end of "this year," and would rebound in 2017 and 2018 even further.

Concurrently, with markets having previously priced in more dovish policy action between October and December 2016, it seems that the unveiling of Draghi & co.'s belief that inflation is due back by the end of this year is proving to be supportive of the Euro. At the start of this week, there was a 54% chance of a rate cut in October, per overnight index swaps; amid the press conference, these odds had dropped to 48%. The reduction in rate cut odds is keeping the Euro elevated. 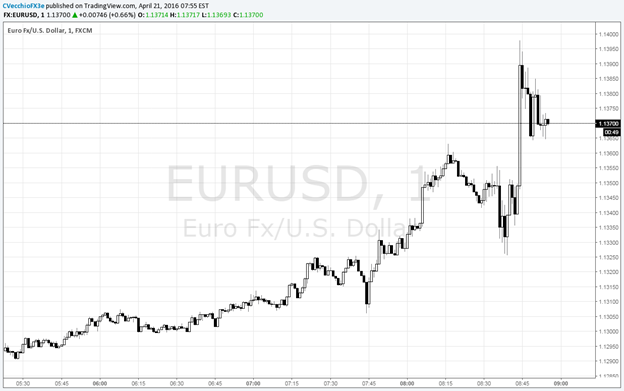