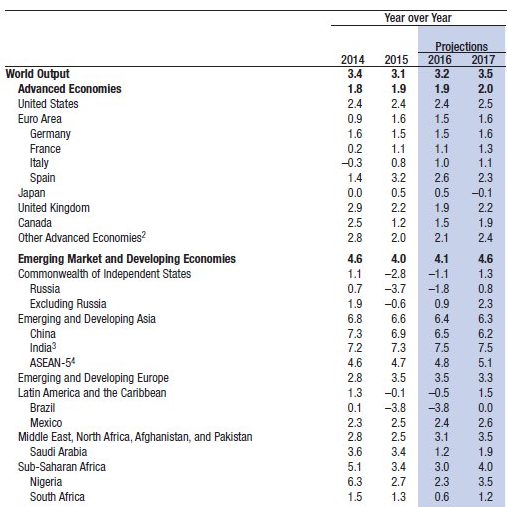 - IMF warns that ‘Brexit’ would cause “severe regional and global damage.”

The International Monetary Fund’s latest report was far from the reassuring message that market participants were hoping for. On the back of tightening financial conditions and weaker growth prospects in both developed and emerging markets, the IMF cut its 2016 global growth forecast by -0.2% to +3.2% for 2016. Indeed, the IMF seems to be sounding the warning bells over the lackluster state of growth as indicated by the depressing title of the report: “Too Slow for Too Long.”

The causes for concern weren’t limited to one region of the world either, although Europe was given special attention. In the foreword to the updated World Economic Outlook, Maurice Obstfeld, IMF economic counsellor said, “In the United Kingdom, the planned June referendum on European Union membership has already created uncertainty for investors; a ‘Brexit’ could do severe regional and global damage by disrupting established trading relationships.”

Regarding the political environment on both sides of the pond, the IMF economic counsellor said, “In both the United States and Europe, the political discussion is turning increasingly inward… Fear of terrorism also plays a role. The result could be a turn toward more nationalistic policies, including protectionist ones.” For too long, policymakers have regarded the upswing in populism in Europe and the United States as a ‘storm in a teacup’ – it’s high time that these political movements are given acknowledgement with respect to their potential abilities to dramatically alter the reach of globalization.