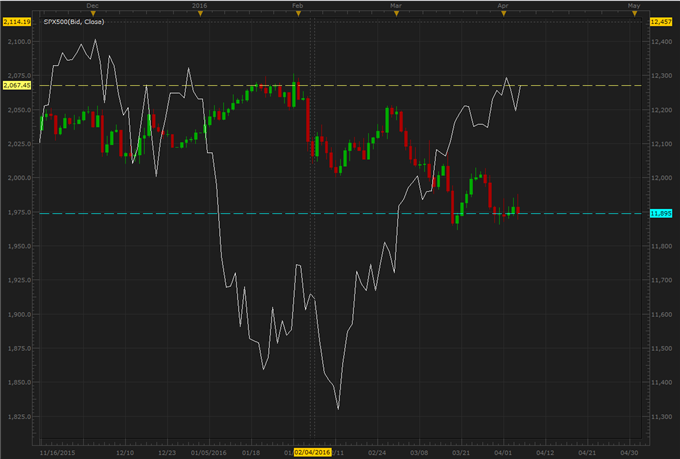 Having trouble trading in the FX markets?

In the FOMC meeting minutes from March, there was a noticeable disagreement between members as some would like to keep open the possibility for a hike in April, while others prefer more caution. This dissention amongst members is indicative of the many opinions regarding the influence of current economic strength in the US. The Fed once again affirmed the need to be data dependent as they look for a clear path to raising rates. In previous minutes there was also mention of data dependency trumping a timeline, as the Fed tries to shift away from focusing on specific meeting dates.

With regards to global headwinds, Fed members saw global risks warranting policy caution. Despite agreeing that the US has remained resilient in the face of global events, many members believed it is prudent to wait before the next tightening step. Domestic data regarding employment and wage growth was cited as support for the Fed to move forward with normalization. Both the labor and housing market indicated strength to the members. Despite the external concerns, many believed the domestic situation justifies consideration for further withdrawal of accommodation. Net exports were cited in the minutes as one of the few factors currently weighing on US growth.

Inflation expectations for the committee remained in line, as members generally shared their optimism for a return to the target over the medium to long run. Energy prices continued to weigh on inflation growth, despite PCE showing a 1.5 percent price gain over the previous 12 months ending in January. The members’ economic outlook saw noted strength in housing and household spending, with strong car sales continuing. However, despite strength in consumer growth, the business sector saw large decreases in capital expenditures, this was suggested to be due to the current slowdown in net exports.

The recent waves of data, both domestic and external are leading to mixed and increasingly disparate views amongst FOMC members. As some call for more caution, others believe inaction will undermine the Fed’s goals. Moving forward data leading into the April meeting – along with the FOMC deliberation itself – will be important considering the level of debate amongst policy setters and market views.