NZD/USD fell sharply today after the RBNZ cut its official cash rate by 25 basis points to 2.25 percent, an unexpected move for the market. The rate cut comes after Monday’s exceptionally negative Chinese trade balance data, which sees its impact echoed in the RBNZ’s statement following the rate cut. In addition to external growth concerns stemming from China and global markets, the policy group noted domestic conditions are also being hurt by low commodity prices that have only very recently seen some modest signs of reprieve. New Zealand’s dairy sector is a major concern for the central bank as it is a major part of their economy, and continues to threaten reduced economic income driven by low prices.

The NZD/USD fell nearly 2 percent within less than a minute following the surprise rate cut. The shock factor seemed to flush much of the market reaction, but the announcement was accompanied by an even more dovish RBNZ report. In the statement, the central bank cites a number of domestic issues weighing on the economy aside from the dairy sector. Some of those concerns include pressures from housing and low headline inflation. The commodity prices incorporated in inflation remain a serious concern for countries that have a strong connection to the production of such raw materials and export industries. New Zealand – as a ‘comm bloc’ country – is certainly exposed to this. The CPI inflation gauge is currently at 0.1 percent and the RBNZ remains dubious of price pressures reviving in the near term. The central bank hopes that inflation will maintain its move towards their inflation goal, but global growth concerns are a clear headwind to expectations

In Governor Wheeler’s comments following the rate decision, a few highlights splashed across the financial headlines. In addition to concerns over global growth – and the trade implications for his country – the policy official remarked that he believes the IMF would downgrade its international growth forecasts when they are released in April. On China, the policymaker suggested the country is facing serious imbalances and that further devaluation of the Yuan could spread deflation across the globe. Speaking to the trend towards accommodative policy which has been so prolific these past years, Wheeler remarked that most central banks would like to see their currency cheaper.

Find key turning points for the NZD/USD with DailyFX SSI 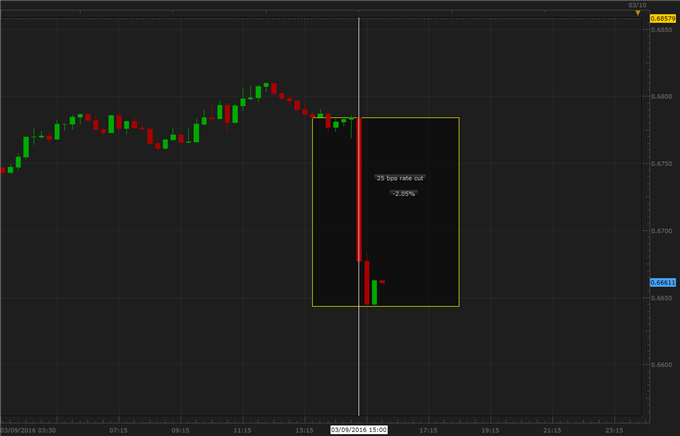 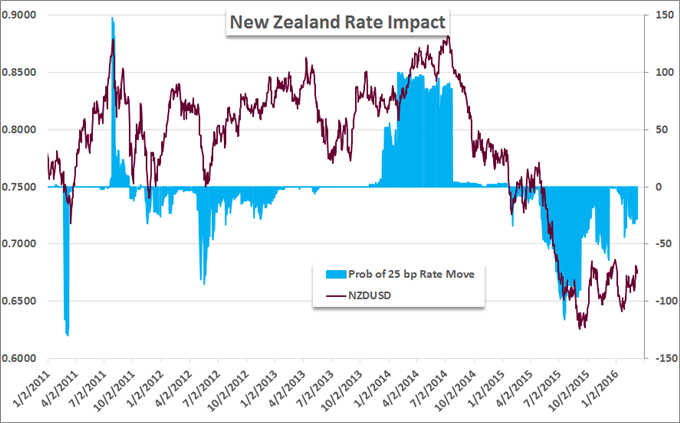