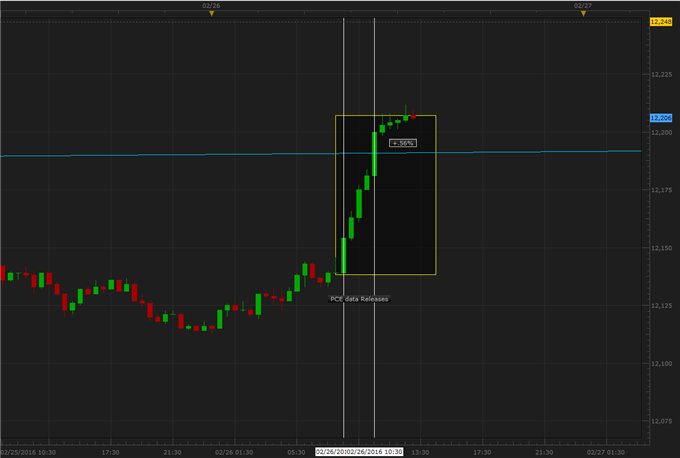 The US Dollar rallied against its major counterparts Friday as the Federal Reserve’s preferred inflation indicator – the personal consumption expenditure price gauge – showed price pressures amid a rate skeptical market. The quarter over quarter core PCE Price index updated alongside the GDP data came out stronger than expected at 1.3% versus 1.2%. More timely, the core PCE year over year (YoY) figure beat at 1.7%, stronger than the prior month’s figure of 1.5%. The annual reading for the ‘headline’ PCE Price accelerated to a 1.3% clip to suggest volatile energy prices are not keeping it anchored. The PCE offers important insight with regards to the FOMC’s dual mandate of 2% inflation and full employment. Despite the negative sentiment in markets, the data released today shows strong economic signs of relating directly to areas the Fed is closely monitoring.

Along with the positive inflation indicators, US consumer data was also released and showed signs of continuing strength. Personal income and spending both came in stronger than expected, and the Michigan Consumer Sentiment indicator beat expectations in its revision. The culmination of strong inflation and consumer data was key to today’s Dollar strength, as the market tallies the appeal of relative growth and the central banks’ ability to pursue further policy tightening after December’s ‘liftoff’.

The major pairs today saw strong movement in favor of the US Dollar. The Dollar strengthened 0.83% against the Euro, 0.8% the Yen, 0.86% compared to the Pound, and roughly 1% against the Australian Dollar. This data will further service to shape speculation for policy for weeks leading up to the March FOMC meeting