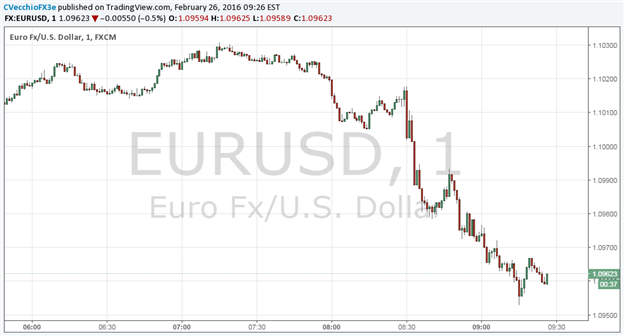 - Consumption – in spite of the strong US Dollar – demains tepid at best amid a slowing global economy.

The second US growth reading of Q4’15 came in better than expected (thanks to a rebound in inventory production figures), and despite mixed internals (consumption slowed slightly), market participants are taking the data as a sign that some of the near-term pessimism regarding the US economy may be overblown. This idea that markets may have been too pessimistic on the US economy, and thus the US Dollar, has been an idea that we’ve been running with for a few weeks now, and today’s report should help resolve the market’s seemingly inherent contradiction: data has been disappointing relative to expectations; but the Q1’16 FRB of Atlanta GDPNow forecast is still up at +2.5%.

Rate expectations are firming up slightly after the data, which is helping support the US Dollar. According to the Fed funds futures contract, the implied probability of a 25-bps rate cut in March increased from 10% yesterday to 12% today; the odds of at least one rate hike in 2016 improved to 35% today from 30% yesterday.

Here are the data that’s lifted the US Dollar this morning:

EUR/USD had been trading in a narrow range all morning and found the improved Q4’15 US GDP to be perhaps the most meaningful baerish catalyst of the day, more so than the earlier disappointment in the preliminary February German CPI figures. EUR/USD has held on to most of its losses, having traded at $1.1017 ahead of the report to as low as $1.0954 thereafter. At the time this report was written, EUR/USD was tradding at $1.0963. Similar price action was observed across the USD-complex in GBP/USD and USD/JPY.