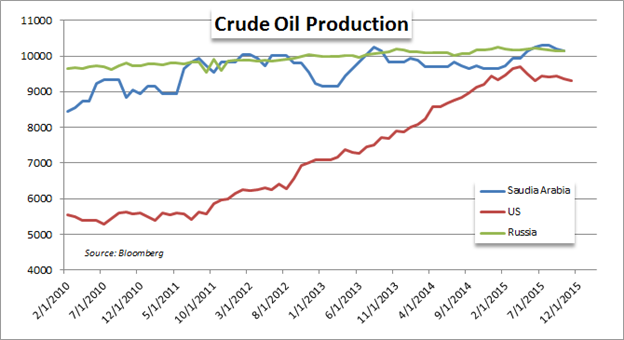 Are you losing money in forex trading? The “Traits of Successful Traders” may explain why.

Speculation of a potential oil production cut was curbed by commentary from Saudi Arabia Oil Minister Ali al-Naimi. He stated that a reduction in drilling will not occur but that a freeze in output growth may be possible if other crude exporting nations coordinate. If such a cap in production is agreed to, it is expected to be near January’s figures. The politician noted that this oil glut will not be the same as in 1986.

Naimi’s comments come a week after a provisional freeze suggestion was mentioned between oil exporters Saudi Arabia, Russia, Qatar and Venezuela. The deal was cited on the condition that other nations will join, notably Iran. This country was recently released from economic sanctions barring them from the oil trade. Iran’s reemergence in the global crude market has created speculation that the country will not participate in the joint deal. Indeed, Iranian Oil Minister Bijan Zanganeh said the idea of a freeze was “laughable”.

Talks of a joint production hold is due to the drop in price the commodity has undertaken since 2014, losing nearly 70 percent of value. Fundamental contributions to this historic supply-demand imbalance include record Saudi Arabia, United States and Russia production as well as the economic slowdown in China – the second largest consumer of crude oil.

The American Petroleum Institute (API) reported that crude inventories increased by 7.1 million barrels in the week to February 19th to 506.2 million - greater than the forecast of 3.4 million barrels. Below is a chart of crude oil production using statistics from the US Department of Energy.