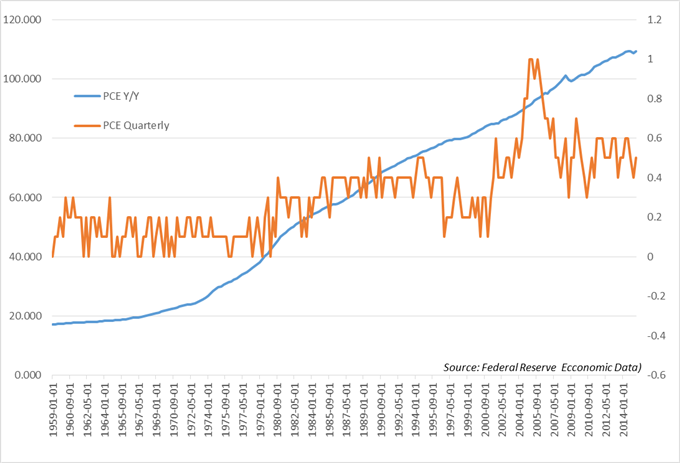 What are the Traits of Successful Traders? See what our studies have found to be the most common pitfalls of retail FX traders

US household consumption accounts for roughly 70 percent of GDP according to World Bank data. Due to the size of the US consumer base, data such as personal income and personal spending are important factors for gauging growth. Where income growth has kept pace, personal spending has stalled and reflects the lulls of previous years. These pressures would add another issue for the Federal Reserve to deal with, as they continue to tighten.

The inflation data derived from today’s data carries significance in context of the current monetary environment the Federal Reserve finds itself in. The Fed is one of the only major central banks that has initiated a rate hike with the prospect of further hiking. In contrast, banks such as the ECB and BoJ are looking to further ease their monetary base. With PCE being one of the major indicators for policy considerations in the Fed ‘dual mandate’, tepid inflation could suggest a far less aggressive tightening path for the Fed.

After today’s PCE data release, Federal Reserve’s Stanley Fischer gave a speech regarding the cautionary tone the Fed is taking as more central banks embrace negative interest rates. His focus on the inflation rate was noted as he further articulated that the Fed would like to see inflation rise to productive and sustainable levels. These data points will carry more weight moving forward as the Fed heads for its next rate gathering on March 16th.