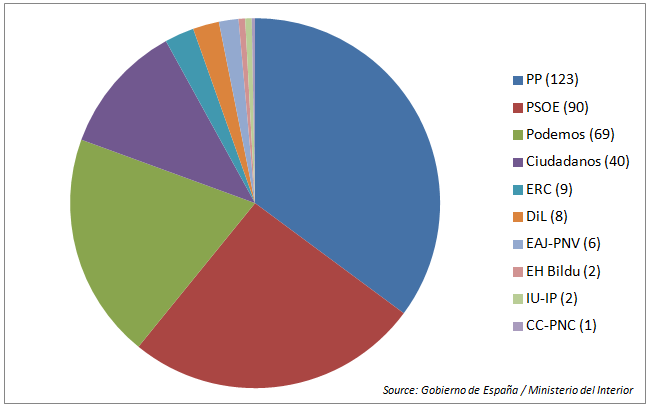 EUR/USD Gaps Down at Weekly Open on Spain Election Outcome

The Euro gapped down against the US Dollar at the open of the trading week after preliminary results from Spain’s general election crossed the wires. The ruling People’s Party (PP) won plurality with 123 seats but fell short of the 176 threshold needed to for a ruling majority in the 350-member parliament. From here, Prime Minister Mariano Rajoy will try to form a coalition to remain in power.

The arithmetic may prove difficult for Mr Rajoy however. Taken together, the seats won by the PP and Ciudadanos, its natural ally on the right side of the spectrum, amount to 163 and still fall short of majority. Meanwhile, the center-left Socialist party (PSOE) – which came in second with 90 seats – may have a better shot at forming a like-minded coalition if it can unite the eurosceptic, anti-austerity Podemos and the Republican Left of Catalonia (ERC) under its banner. The latter could conceivably secure support from the DiL, which supports Catalan independence like the ERC and so could be enticed into a pact on this basis despite an otherwise right-of-centre world view. That would put the PSOE-led grouping at precisely 176 votes.

Any coalition that includes Podemos is likely to send jitters across the financial landscape. The party is seen as analogous to Greece’s Syriza, whose firm opposition to EU/IMF-mandated austerity measures spooked investors with the possibility of a heretofore unprecedented exit of a Euro member state out of the currency bloc. A similar narrative playing out in the Eurozone’s fourth-largest economy could prove deeply destabilizing for regional and global markets.

With this in mind, the PSOE is a pro-EU and pro-federalist party, which puts it at odds with key positions taken by the Catalan separatists and Podemos. The PP has a similar problem with the DiL and the Basque Nationalist Party (EAJ-PNV): both sit to the right of the political spectrum but their support for Catalan and Basque self-determination puts them at odds with the PP’s Spanish unionist platform. This will make it hard for Mr Rajoy to secure the 177-seat group made up of these two parties plus the PP and Ciudadanos.

Bridging the ideological divide may be even more challenging for a PSOE/Ciudadanos/Podemos coaliltion, an outcome similar to the end result of recent elections in neighboring Portugal. Making things yet more difficult, the PSOE and PP have both ruled out a grand coalition made up of the two mainstream parties.

From here, a period of uncertainty marked by vigorous horse-trading along the way to government formation looks likely ahead. Investors will keenly monitor the proceedings, creating ample opportunities for headline risk to generate volatility for the Euro and market sentiment at large. 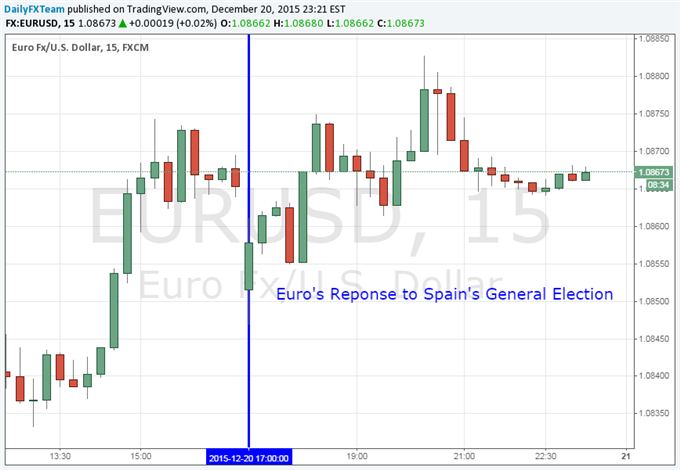