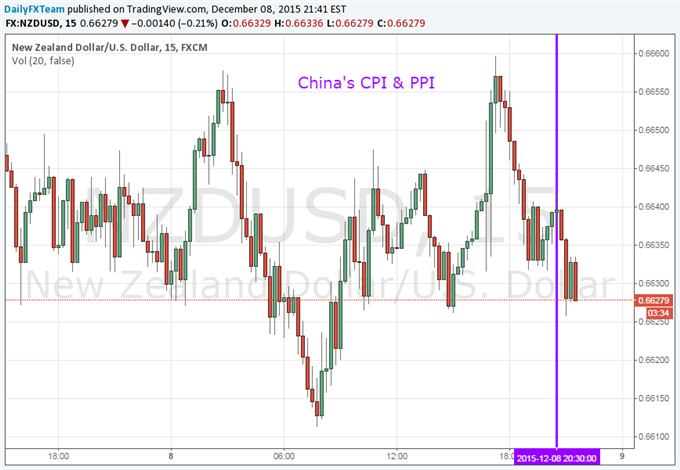 Neither the AUD/USD nor NZD/USD exchange rate responded significantly to the Chinese inflation statistics that crossed the wires Wednesday morning. The consumer price gauge (CPI) for the month of November rose 1.5 percent (year-over-year), which surpassed the 1.4 percent consensus forecast and the 1.3 percent print last period.

Wholesale expenses fell at a rate slower than traders’ anticipation of -6.0 percent (YoY) drop. The PPI figure for November matched its October reading by contracting -5.9 percent. These inflation figures follow a global trend of diminished price pressures that has encouraged many global central banks to pursue accommodative monetary policy. The People’s Bank of China (PBoC) has followed a similar route, but its tools are dissimilar from the rate cuts and large-scale QE programs employed by central banks in the west due to its dissimilar financial system. That said, the economic implication from deflated price pressures is distinctly felt and a dilemma officials must face.

Both the Aussie’s and Kiwi’s lukewarm reaction may reflect the markets’ distraction with more distinctive event risk ahead. It is understandable a reluctance to commit to a directional bias ahead of the Aussie jobs figures or the RBNZ’s upcoming rate decision. According to forecasts, Australia is expected to report a net 10,000 decline in national payrolls while overnight index swaps are pricing in a 62 percent probability that the central will lower its base lending rate to 2.50 percent from the current 2.75 percent.