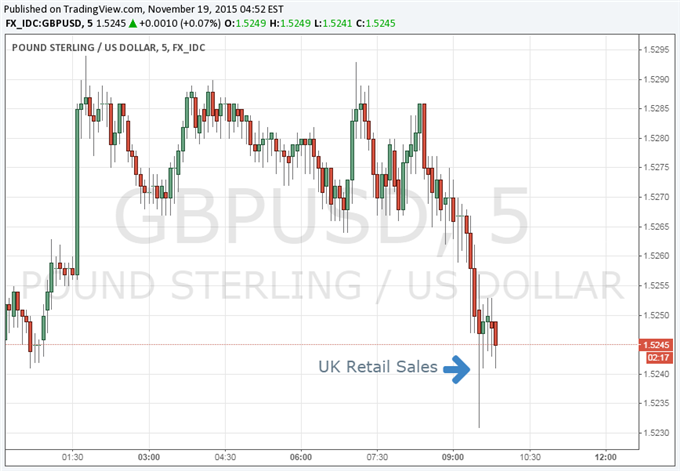 The British Pound was little changed versus the US Dollar (at the time this report was written) after the UK’s Retail Sales figures came below expectations. Compared with September 2015, sales volume was estimated to have decreased by -0.6% in October, below the expected decline of -0.5%, and below the prior revised increase of +1.7%. The year-on-year figure showed growth for the 30th consecutive month compared to last year, increasing by +3.8%, but missing expectations for a rise of +4.5%, and lower than the revised prior reading of +6.2%. Core Retail Sales also printed figures below expectations. Excluding auto fuel, sales dropped -0.9% in October, more than the -0.6% predicted, and down from the prior revised increase of +1.5%. Core year-on-year estimates came in at +3.0%, below the expected +3.9% and the prior revised +5.7%.

Economists expected retail sales to drop after last month’s Rugby World Cup promotions and better weather were presumed to assist the biggest Retail Sales figures increase in almost a year. With that being said, the numbers fell below expectations with notable declines in food, textiles and clothing. The UK’s Office for National Statistics did note that the underlying pattern in the data, by a 3 month on 3 month movement in the quantity bought, showed growth for the 23rd consecutive month, increasing by +0.9%.

The figures came less than two weeks after the BoE’s new quarterly forecasts were released in which the BoE’s Monetary Policy Committee (MPC) reduced its inflation forecasts for the end of 2015, as well as in 2016 to 2017; a reduction which preceded a significant fall in the British pound on what seemed to be traders assumptions that low interest rates were required for a longer period. Deputy Governor Ben Broadbent remarked yesterday that the MPC’s projections were “far from perfect” as a guide for the timing of an interest-rate increase. With headline inflation well below the BoE’s 2 percent target, today’s Retail Sales figures appear to have had little effect on the perceived timing of the BoE’s next move, as the market expected a drop and overall trend shows growth.