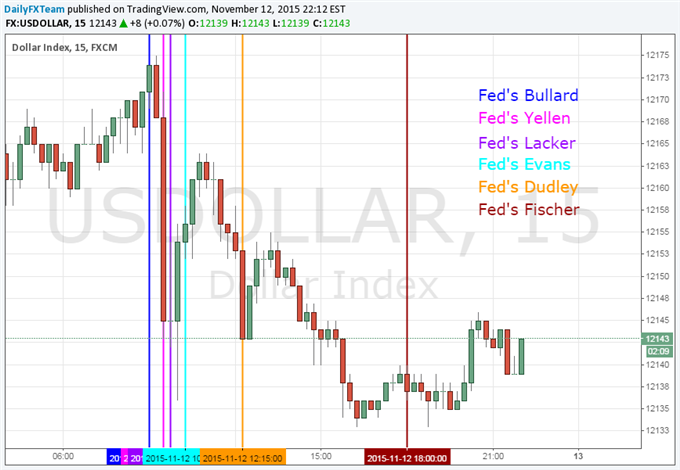 US Dollar Shows Mixed Response to Wave of Fed Commentary

The US Dollar produced a mixed reaction as a slew of comments from key Federal Reserve officials crossed the wires. On balance, the overall tone of policymakers’ remarks seems to suggest officials are leaning toward a rate hike at next month’s meeting. Indeed, Fed Funds futures contracts reveal markets are now pricing in the probability of such an outcome at 69.8 percent.

St. Louis Fed President James Bullard said there is “no reason to experiment with extreme policy”. His projections for the domestic economy are above the median expectations. With a 5 percent unemployment rate and some measures of Fed goals being reached, the central banker says it is prudent to normalize monetary policy. Bullard did note that an unexpected shock can put a hold on the rate hike process, underscoring the Fed’s data-dependent posture.

Richmond Fed President Jeffrey Lacker’s comments leaned more towards the hawkish side of the spectrum. His forecast for the US economy is also above the median estimates. Lacker believes that inflation is still on the proper course to reach the 2 percent target and that there is a “strong” case for the Fed Funds rate to be increased.

Chicago Fed President Charles Evans sees the Federal Funds Rate (FFR) in the 0.75-1.00 percent range at the end of 2016. He thinks the actual path tightening is more important than when the process starts. Evans is waiting to see a greater pick-up in CPI before he is as comfortable as his colleagues with a rate hike. As of now, he lacks confidence that inflation will reach its medium-term goal.He predicts the US will grow 2.5 percent in the next eighteen months.

New York Fed President William Dudley believes a rate decision needs to have the global economy in mind. In regard to China, the Dudley said there is a legitimate reason to keep an eye on the East Asian giant. He said inflation is substantially short of the Fed’s goal. Dudley expects the conditions necessary for rate lift-off will be met soon. The central banker noted solid gains in October’s payroll report. He expects gradual tightening after lift-off. Dudley is concerned a delay in the rate hike process may create a “hard landing”.

Finally, Vice Chair Stanley Fischer gave insight to his view on monetary policy outlook. He believes that 2 percent inflation will return if expectations remain anchored. Fischer said CPI will rebound once the transitory impacts of US Dollar strength and crude oil weakness fade.