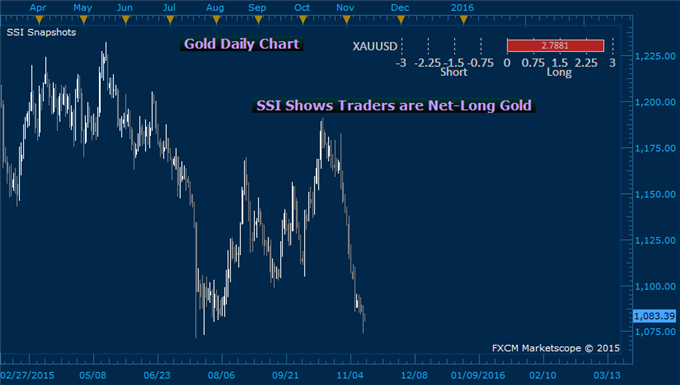 Gold's Demand Up 8% in 3Q, SSI Shows Traders are Net-Long the Commodity

The World Gold Council, an industry leader in analyzing gold trends, reported that the precious metal is monitors witnessed an 8 percent jump in demand through the third quarter. The group noted that consumption was up to 1,120.9 metric tons though the period compared to 1,041.9 metric tons in the same period last year. Despite the raw material seeing greater demand amongst retailers, prices fell 2 percent over the same time frame.

A key impending event risk that may alter the markets’ attitude towards the commodity is the Federal Reserve’s December rate decision. If the central bank hikes interest rates, dollar-denominated assets - such as US bonds - will redirect funds away from gold and towards assets with a higher return. That may very well bolster the greenback and thereby weigh this and other commodities priced using the currency. The current implied probability for the FOMC to normalize monetary policy at its next meeting is 70 percent using Fed Fund Futures.

FXMC offers a free indicator for retail traders to analyze the bias of the markets. The Speculative Sentiment Index (SSI) is a technical indicator that shows the ratio of short-long trades. Currently the SSI shows that investors are net long gold relative to the US Dollar.