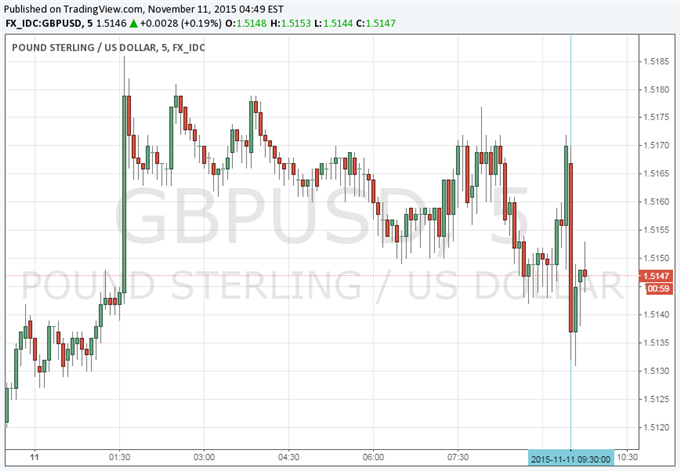 The British Pound lost 0.25% versus the US Dollar after today's UK employment data, as the unemployment rate unexpectedly fell, but wage growth slowed. The unemployment rate dropped to 5.3% from July to September, below an unchanged 5.4% rate expected by economists, marking the lowest rate since 2008. The UK added 177K jobs, beating expectations for an addition of 120K jobs, subsequently raising the number of people employed to 31.2 million. Jobless Claims signaled a rise of +3.3K; a worse figure than was expected by economists, who’s forecast was for a rise of +1.4K. The prior reading was revised down to 0.5K. Core average weekly earnings slowed to 2.5% in the last three months, below the expected 2.6%, and below the prior 2.8%. Pay growth including bonuses remained unchanged at 3.0%, but fell to meet expectations for a rise to 3.2%.

The report comes a week after the BoE reduced its inflation forecasts for the rest of 2015, as well as 2016 to 2017, so data today was in high focus. Labor market data plays a major part in the BoE’s outlook, with the bank widely considered as the second in line to raise interest rates after the Fed. The report came in line with expectations from the central bank who last week said that they expect a modest fall in unemployment further down the line. While the headline unemployment rate came in strong at 5.3% it seems the market leaned on the lower than expected data, namely the slowdown in wages, to initiate an initial push down of about 0.25% after trading lower from the day’s high at about 1.5186.

DailyFX Currency Strategist Ilya Spivak remarked earlier today that the wages data will be of more importance in today’s report, and that a soft result could be seen as delaying tightening and weigh on the UK unit.