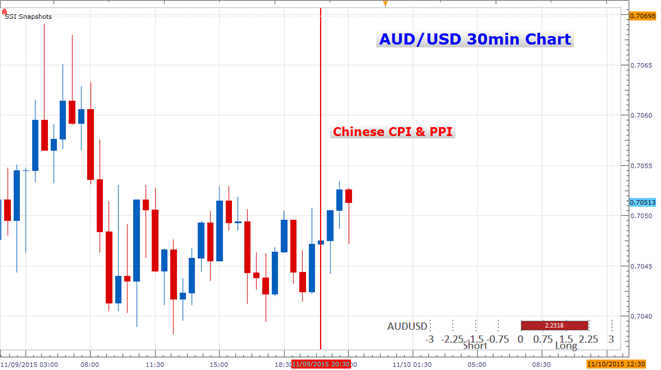 The Australian Dollar offered a stifled response to the round of October Chinese inflation figures that crossed the wires Tuesday morning. The consumer price index (CPI) came in at a 1.3 percent year-over-year increase in October compared to the 1.5 percent pace estimated by economists. This is the lowest CPI reading in six months. At the same time, Chinese producer price index figures (PPI) maintained their pace of a 5.9 percent year-over-year contraction through the month of October.

A lackluster response from the Aussie may be in part due to limited implications for the Reserve Bank of Australia and its monetary policy stance. A similar restraint was noted from the currency following the Chinese trade report.As Currency Strategist Ilya Spivak pointed out, a round of mildly-softer Chinese CPI figures would do little to stoke PBOC stimulus expansion bets. China is Australia’s largest trading partner. As such, signs of decreased demand from the world’s second largest economy can have a negative spillover effect on Australia’s economy. Such implications may cause the RBA to act by decreasing interest rates.

With the RBA expected to cut rates at least once over the next 12 months, today’s round of soft Chinese inflation figures appeared to fall short of the spillover high-water mark. Like the AUDUSD, Australian 2-year government bond yields showed almost no reaction.