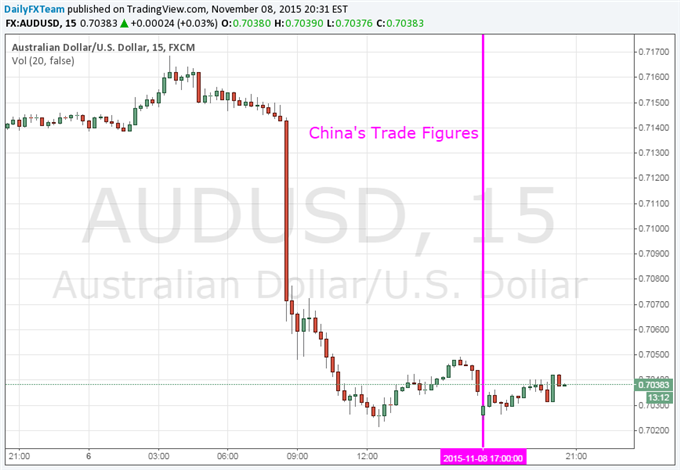 Why did that currency just rally? Always stay in the know by adding the DailyFX News App to your charts.

The Aussie Dollar opened lower against its US namesake at the beginning of the trading week as soft Chinese trade statistics crossed the wires. The trade surplus figure in October showed the highest level on record with a print of $61.64b. This data was below the $62b expectation but above the prior’s number of $60.34b. The second largest global economy’s export reading fell faster than expected with a negative print of 6.9 percent versus the predicted contraction of 3.2 percent. Import figures were dismal as well. Traders were predicting a decline of 15.2 percent but received a drop of 18.8 percent instead.

From the Aussie’s perspective, this data could spell diminished demand for Australian exports. China is Australia’s largest trading partner. Chinese demand has fueled much of the consumption for Australia’s raw materials. The soft trade figures may also affect RBA monetary policy expectations. A reduction in Chinese demand may weigh on Australian CPI and trade figures. According to interest rate swaps, there is a 17 percent probability of a RBA rate cut at the next monetary policy meeting.

Moving to the international viewpoint, this data may add to the fear that a global slowdown is looming over the markets. Concern over the health of emerging countries has been noted by the IMF and Fed Chair Janet Yellen. This has led investors to think a slowdown in China may have spillover affects into other nations, which will affect asset prices.