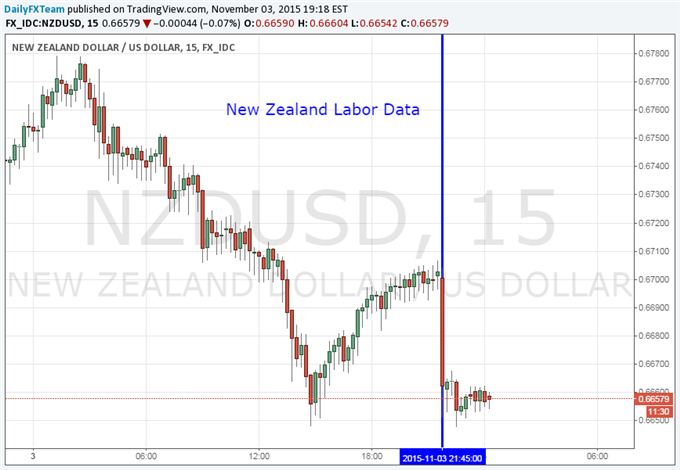 The Kiwi Dollar dropped 0.6 percent against its US namesake as a set of disappointing labor statistics from New Zealand crossed the wires. Unemployment in the third quarter met the consensus forecast at 6 percent – 0.1 percentage points higher than the previous reading. This marks the highest level since June of 2014. The quarter-over-quarter employment change posted its first net loss in three years with a -0.4 percent trim in payrolls. The year-over-year pace of employment growth slowed to a pace of 1.5 percent versus the 2.5 percent expected and 3.0 percent clip previously. This represents the slowest growth rate in two years. Furthermore, the participation rate reached its lowest point in over a year at 68.6 percent and wage growth slowed to 0.4 percent.

This soft data adds to the soft New Zealand inflation data that is keeping the country’s central bank on the defensive and voicing readiness to implement accommodative monetary policy. New Zealand front-end government bond yields fell alongside the currency, reflecting the markets’ growing expectation for a rate cut by the RBNZ. Traders are pricing in a fifty-two percent probability of a rate cut at the next monetary policy meeting. Despite the speculation, retail FX traders are nearly balanced on NZDUSD positioning. According to the FXCM Speculative Sentiment Index (SSI), there are 1.03 NZDUSD longs per every short.

See how retail traders are positioning in the majors on DailyFXor see the sentiment on your charts using the FXCM SSI snapshot.