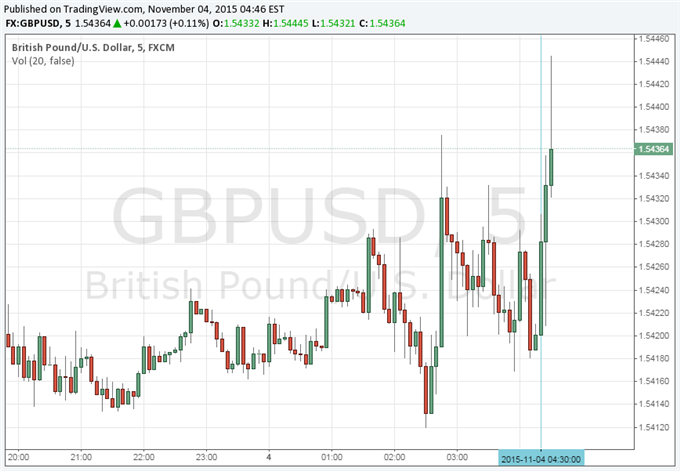 - Growth strengthens for the first time in four months

The British Pound rose 0.16% versus the US Dollar (at the time this report was written) after today’s Markit/CIPS Services PMI showed services growth accelerated. The diffusion index, compiled by Markit Economics, rose to 54.9 from September’s reading of 53.3. The number was above economists’ expectations of 54.5, and signaled that services growth rate strengthened for first time in four months. Markit/CIPS composite PMI, which is a combined index of both services and manufacturing, increased to 55.4, above the expected 53.6, with the prior reading at 53.3 after Monday’s Markit manufacturing PMI came well above expectations. Today’s report showed employment rose at fastest pace since May, but pace of expansion in output was still the second weakest since May 2013.

Looking into the report, Markit had some interesting comments. Markit remarked that the data points to GDP rising at a quarterly rate of 0.6% at the start of Q4, upfrom 0.5% in Q3; an improvement which, together with a boost in hiring signaled by the three surveys, may influence more policymakers into raising interest rates before the end of the year. On the other hand, Markit said that dovish policymakers will note the lack of inflationary pressures in October,suggesting that there is no need to hike rate in the immediate future. As of this morning, overnight index swaps were pricing in the first BoE rate hike in May 2016, while Sterling 90-day options contracts were pricing in July 2016, notes DailyFX Currency Strategist Christopher Vecchio.

DailyFX Currency Strategist Ilya Spivak said earlier today that a positive read in the Markit Services PMI may boost BoE policy bets, sending the British Pound higher, but near-term follow-through may be limited with investors probably reluctant to take firm directional views ahead to this week’s monetary policy announcement. The BoE will announce its next interest-rate decision, as well as the November Quarterly Inflation Report, this Thursday (tomorrow) at 07:00 EDT/12:00 GMT.