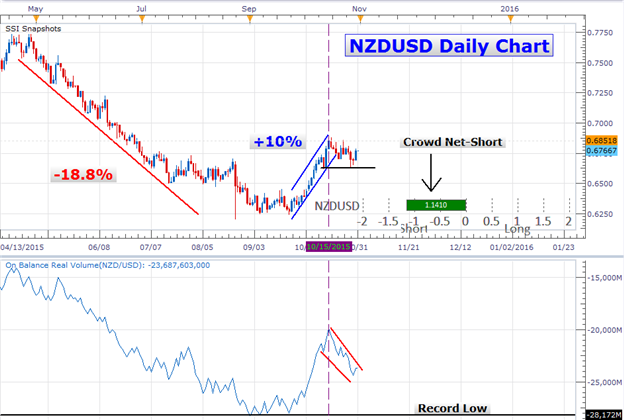 For the majority of 2015 thus far, the New Zealand Dollar spent most of its time sliding against its US counterpart. This trend was most prominent between May and September when the NZDUSD declined more than 18.8 percent. At the end of that phase though, the pair spent three weeks climbing more than 10 percent before topping around 0.68515 on October 15th. Now the Kiwi appears to be in consolidation mode as it awaits a clear revival of conviction.

FXCM offers a few indicators free to demo account holders which can help unveil the market’s bias for direction. The first application is called the Speculative Sentiment Index (SSI). Quantitative Strategist David Rodriguez produced a special video dedicated to explaining its function. The second indicator is called the On Balance Real Volume. Forex Trading Instructor Tyler Yell wrote an in-depth article which explains the utility of the application.

Currently, the SSI indicates that the majority of the retail NZDUSD traders monitored are net-short, as can be seen on the chart below. Since SSI is commonly used as a contrarian indicator, a trader can use the net-short bias in support of a bullish view for the Kiwi. At the same time, the On Balance Real Volume indicator has been falling back towards its series low after the pair topped on October 15th and turned to consolidation. This shows that fewer traders have been taking positions to support the move. The On Balance Real Volume can serve as a function of conviction behind price movement.

This past Wednesday, the Reserve Bank of New Zealand released its most recent monetary policy statement. In addition to leaving rates unchanged, the central bank reiterated that a further reduction in its benchmark lending rate is likely. However, it also adopted a wait-and-see approach that is dependent on incoming economic data. Meanwhile, the Fed left its December monetary policy announcement open to the possibility of a rate hike. A liftoff is tied to job gains, inflation confidence, and the pace of expansion of the US economy. For both the RBNZ and Fed, it appears key calendar event releases will be on the spotlight as the NZDUSD fluctuates.