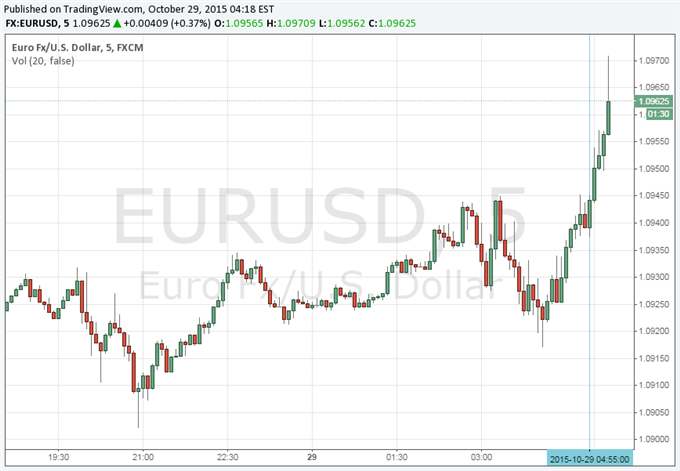 The Euro rose 0.25 percent versus the US Dollar after today’s German unemployment data showed joblessness declined by a seasonally adjusted 5,000 individuals, subsequently lowering the number of people unemployed, which now stands at 2.788 million. The number was above economist’s expectations for an increase of 4,000 individuals to the labor force. The unemployment rate remained unchanged at 6.4 percent, as expected.

The data might suggest that the German labor market remains healthy, despite the slowdown in China and emerging markets, which usually hurts German exports. The positive data comes a week after Mario Draghi’s dovish ECB press conference, in which he signaled that the ECB may extend or expand QE and might even cut the Eurozone’s deposit rate on deteriorating economic outlook. The data today initiated a break above the day’s prior high at around 1.09455, with major event risks still looming later today.

DailyFX Currency Strategist Ilya Spivak said today that an upside surprise in the US GDP figures might add to US Dollar gains, while below consensus German CPI data may initiate new selling pressure on the Euro.